Max Scherzer looking to pull Dodgers even with Braves in NLCS 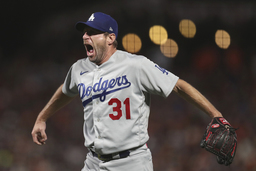 The Atlanta Braves have a win in their back pocket but Los Angeles Dodgers manager Dave Roberts believes his team has some offensive momentum as the clubs prepare to meet again in Atlanta in Game 2 of the National League Championship Series on Sunday night.

The Dodgers are scheduled to send ace right-hander Max Scherzer to the mound to duel Braves righty Ian Anderson.

In a game some considered a must-win for the Braves because they had their best pitcher, Max Fried, going against a Dodgers opener, Atlanta used a walk-off single by Austin Riley in the ninth inning for a 3-2 win in Game 1 of the best-of-seven on Saturday.

Despite having won 18 fewer games than the Dodgers in the regular season, the Braves have the home-field advantage in the series based on the fact they won the NL East, whereas Los Angeles finished second in the West.

"We got home-field advantage, so to be able to take Game 1 is always huge," Fried said. "Now it's about trying to get a second one (Sunday)."

Fried survived eight Dodgers hits in six innings to keep the Braves in a 2-2 tie. As well as getting a solo home run from Will Smith in the fourth, Los Angeles put runners in scoring position in three different innings against Fried, and had a pair of singles sandwiching a double play in another.

But they went just 1-for-6 against Fried, and 1-for-8 in the game, with runners in scoring position.

Roberts wasn't crazy about the lack of clutch hitting, but noted he's liking more of an unselfish approach his guys are taking at the plate after getting blanked twice in the first three games of their best-of-five win over the San Francisco Giants.

"We're just trying to fight and win pitches and give ourself a chance," he said. "And if you give yourself a chance, it's better than punching (striking out). We've been doing a much better job of that."

Scherzer pitched twice in the first round, limiting the Giants to one run on three hits over seven innings in a 1-0 loss in Game 3, before throwing the final inning of the series-clinching, 2-1 win on Thursday.

The veteran of 25 postseason games struck out 12 in those eight innings.

Scherzer has never faced the Braves in the postseason, but having been a former rival in the NL East while with the Washington Nationals, he's plenty familiar with Atlanta. He's gone 10-9 against the Braves in 27 lifetime head-to-heads, including 25 starts.

He has held Braves star Freddie Freeman to a .234 average in 47 career plate appearances, and has allowed just one hit in seven duels with Riley, striking him out three times.

Anderson saw the Dodgers twice in last year's NLCS, shutting them out on one hit over four innings in an 8-7 win in Game 2, before getting pulled after allowing two runs in three innings in a 4-3 loss in Game 7.

Will Smith had a two-run single off Anderson in the season-ending loss by the Braves, a game that sent the Dodgers to the World Series.

The 23-year-old has faced the Dodgers just one other time in his two-year career, that coming in a 9-5 home loss in June in which he was pulled in the fifth inning.