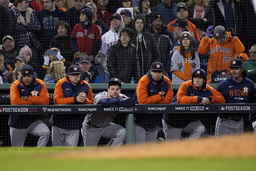 BOSTON -- On the heels of back-to-back blowout losses, the Houston Astros are scrambling to find an answer for the Boston Red Sox bats after falling behind 2-1 in the best-of-seven American League Championship Series.

The Red Sox followed up their 9-5 win in Game 2 on Saturday in Houston with a 13-2 thumping of the visiting Astros in Game 3 on Monday night. Game 4 is set for Tuesday night in Boston.

"The thing is, you know what, we have guys on the pond, let's be aggressive here," Schwarber said of the team's approach. "We're wanting to get after these guys. We want to be aggressive."

After losing ace Lance McCullers Jr. to a right forearm strain before the series, the Astros also lost Game 2 starter Luis Garcia to a right knee strain as he was pulled before getting an out in the second inning.

"We know what happened here today. It was not a great game for us. It was terrible," Astros shortstop Carlos Correa said postgame. "We've been here before, so (on Tuesday) we come back with fresh minds, put in the work and go out there and try to even the series."

Baker ultimately settled on Zack Greinke as his Game 4 starter. The veteran right-hander has pitched only once this postseason, allowing two hits during a scoreless inning of relief in the Astros' 12-6 loss to the Chicago White Sox in Game 3 of the AL Division Series.

The 37-year-old former Cy Young Award winner was shipped to the bullpen following a mediocre regular season in which he went 11-6 with a 4.16 ERA over 30 games (29 starts).

Despite a long and successful career, Greinke has struggled historically in postseason outings, going 4-6 with a 4.18 ERA over 20 appearances, including 19 starts.

Against the Red Sox, Greinke is 2-5 with a 5.09 ERA in nine career games (eight starts). His numbers are even worse at Fenway Park, where he has gone 0-2 with a 10.22 ERA in four appearances (three starts).

Pivetta has pitched out of the bullpen twice during the Red Sox's postseason run. He tossed four scoreless innings and registered seven strikeouts to pick up the win in Boston's 6-4, 10-inning victory against the Tampa Bay Rays in Game 3 of the ALDS.

Prior to that, Pivetta surrendered three runs over 4 2/3 innings in Tampa Bay's 5-0 win during the series opener.

Pivetta faced the Astros once during the 2021 regular season, tossing six innings of two-run ball while striking out nine in a 2-1 loss on June 6 in Houston. Overall, Pivetta is 0-2 with a 5.25 ERA in two career starts against the Astros.