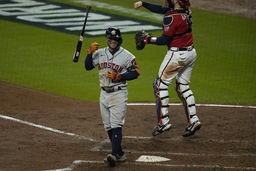 The Houston Astros traveled to Atlanta but seemed to forget to pack their potent postseason bats.

The powerful offensive squad looks to regain its form on Saturday night when it takes on the Braves in Game 4 of the World Series.

Atlanta holds a 2-1 lead in the best-of-seven series after recording a 2-0 victory on Friday night. Five Braves hurlers combined on a two-hitter, beginning with right-hander Ian Anderson's five no-hit innings.

The Astros didn't get a hit until the eighth inning in a stunningly anemic performance. Houston averaged 6.3 runs in its first 12 postseason games this year, scoring at least five on 10 occasions.

However, production was nowhere to be found in Game 3. The Astros had just two at-bats with runners in scoring position and didn't come close to getting an extra-base hit.

"Invariably, when you shut us down, usually our guys come back the next day and score a bunch," Houston manager Dusty Baker said after the Game 3 setback. "So, hopefully history repeats itself."

Aledmys Diaz got the first Houston hit to start the eighth when Braves left fielder Eddie Rosario had trouble tracking the ball and it fell in front of him. Alex Bregman's leadoff single in the ninth was Houston's other hit.

The Astros have scored just two runs total in their two losses in the series.

With Houston so silent, Austin Riley's run-scoring double in the third inning and Travis d'Arnaud's homer in the eighth were all the offense Atlanta needed on Friday.

Riley has two homers and seven RBIs in the postseason. He said he has been sticking to the approach he used in the regular season, when he collected 33 homers and 107 RBIs.

"You get into the postseason and I feel like a lot of people want to change a little bit and do a little extra, but I try to keep it as simple as possible," Riley said.

The Braves, who are 6-0 at home in the postseason, could avoid a return to Houston by winning the next two nights.

Atlanta is two wins away from winning the franchise's first World Series crown since 1995, but the Braves know there is much more work to do.

"We have some unfinished business," Riley said.

Veteran right-hander Zack Greinke will be the Game 4 starter for the Astros. The 38-year-old has pitched only 2 1/3 innings in two appearances (one start) this postseason after seeing his role diminish late in the season.

Greinke made two previous World Series starts, both in 2019 for the Astros, and produced a 2.45 ERA in two no-decisions. He gave up three runs and nine hits in 11 innings in the series against the Washington Nationals.

Greinke went 11-6 with a 4.16 ERA in 29 starts and one relief appearance during the 2021 regular season. He spent two stints on the injured list late in the season due to a positive COVID-19 test and later a neck injury.

Atlanta's Joc Pederson has had regular-season success against Greinke, going 9-for-30 (.300) with two homers, one triple and four doubles.

In spite of Greinke's late-season struggles, Houston third baseman Alex Bregman is happy to see a guy with 219 regular-season victories taking the mound.

"It's super valuable to have a future Hall of Famer throwing for you," Bregman said. "He's pitched in big situations. He's pitched great for us in the World Series before, so we have a ton of confidence in him and we want to play good defense behind him and give him some run support."

Atlanta will go with a bullpen game in Game 4. Braves manager Brian Snitker said the team was still deciding who would pitch first.

"It's going to be an opener," Snitker said after Game 3. "We're not sure. Right now we're still, as things get rushed through, talking about who that's going to be."