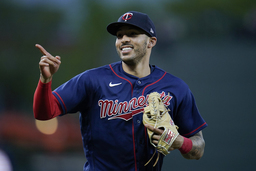 The Minnesota Twins are expected to have both Byron Buxton and Carlos Correa back in the lineup when they face the host Oakland Athletics in the rubber match of a three-game series on Wednesday afternoon.

Correa is set to return after landing on the injured list May 6 with a right middle finger contusion, while Buxton likely will be in the starting lineup following a scheduled day off.

Oakland evened the series with a 5-2 victory on Tuesday after being held to one run in each of its previous three games, all losses.

Kevin Smith belted a two-run homer and Sean Murphy added a two-run single to for the Athletics.

Oakland, which entered Tuesday's game hitting .199 on the season, collected 11 hits in the victory and hopes to carry the momentum into the series finale.

"We've been hitting the ball good, especially the last few games," A's shortstop Elvis Andrus said. "Sometimes that's what it takes. Get a few of those line drives to fall and you get a rally. You have to continue to make that contact and believe it's eventually going to fall."

The Athletics will send right-hander Daulton Jefferies (1-6, 4.84 ERA) to the mound on Wednesday against Minnesota right-hander Sonny Gray (0-1, 3.68).

Jefferies, 26, has lost six consecutive starts since winning his season debut. He turned in an encouraging outing Friday against the Los Angeles Angels, allowing two runs on five hits over six innings in a 2-0 loss.

"It looked like he had a little different mindset," Oakland manager Mark Kotsay said after that game. "There was a little bit of emotion behind him on the mound tonight. I think he had a good game plan and attacked hitters down in the zone, which is his strength. His fastball had good life on it and he mixed in a lot of good changeups."

Jefferies, who has received a total of seven runs of support during his six-start losing streak, last faced Minnesota on May 8. He yielded four runs on seven hits over five frames in a 4-3 road loss.

Minnesota will counter with Gray, who has not completed five innings in any of his first four starts.

Gray, 32, received a no-decision after allowing two runs on four hits over 4 1/3 innings against the Cleveland Guardians on Friday. He struck out eight but issued four walks.

"Not overly thrilled with how I threw the ball," Gray said. "I think as a unit and as a whole staff in general, we do have to clean up the walks and giving teams free passes."

Gray is 0-1 with a 5.40 ERA in three career starts against Oakland, his first major league team. He allowed two hits and struck out seven over four scoreless innings against the Athletics on May 7.

The Twins' offense should have Buxton back in the leadoff spot after the center fielder sat out Tuesday. The 28-year-old has been dealing with nagging knee and hip injuries early this season.

Minnesota is proceeding cautiously with Buxton, who has 11 home runs and 20 RBIs in 24 games. The injury-plagued star has played more than 100 games just once in seven seasons.

Buxton said he supports the team's plan to manage his workload.

"We've got a process, a process of me staying on the field, trying to play 100 games," Buxton said. "So however that looks, who knows? But that's what we have, a plan here, and it's what we're going to stick to. Whatever else, outside of that, kind of doesn't really matter to us. It's all about winning."

The Twins cleared a roster spot for Correa's return by optioning Royce Lewis to Triple-A St. Paul. The rookie shortstop, who homered and doubled on Tuesday, hit .308 (12-for-39) with two long balls and five RBIs in 11 games for Minnesota.