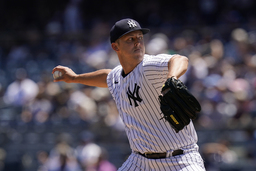 The Pittsburgh Pirates will not only get to host the top team in baseball, but they also will get to see an old friend or two when the New York Yankees visit for games Tuesday and Wednesday.

Taillon and Holmes began their careers with Pittsburgh, and both are having the kind of success the Pirates at one time hoped or even expected they would have with their original team.

Taillon, 30, was considered a top prospect and candidate to anchor Pittsburgh's rotation. Two Tommy John surgeries and a battle with testicular cancer were among the setbacks that kept that from happening before the Yankees acquired him in January 2021 for pitchers Roansy Contreras and Miguel Yajure, outfielder Canaan Smith-Njigba and infielder Maikol Escotto.

Holmes, 29, never got on track with the Pirates, who traded him to the Yankees nearly a year ago after he was 5-7 with a 5.57 ERA in 91 appearances with Pittsburgh.

Both have certainly blossomed with the Yankees.

"Clay is looking pretty dominant over there, and (Taillon) is doing really good this year. We've got to take it to them," Pirates third baseman Ke'Bryan Hayes told the Pittsburgh Tribune Review.

And try to ensure the opposite doesn't happen.

"I hope (Holmes) and (Taillon) don't throw the ball well when they're here. Then, when they leave, I hope they throw great," said Pittsburgh manager Derek Shelton, whose team is coming off a four-game series split against Milwaukee.

Prior to that series, the Pirates had lost five of six and, at 15 games under .500, they do not look like a strong match for the Yankees.

Both teams had a day off Monday. For the Yankees, it was their first scheduled off day after a 20-day stretch. They were 14-6 in that span.

"It was a tough stretch -- some tough travel, middle of the night situations, day games after night games," New York manager Aaron Boone said. "I thought we played well through it."

"We've been playing good, especially for that many days in a row," New York pitcher Jordan Montgomery said. "The competition we've been facing has been incredible, so to come out of it (14-6), that is pretty good."

Taillon is coming off a win Wednesday against Oakland, when he gave up three runs and seven hits in five innings, with six strikeouts and two walks. This will be his first appearance against his former team.

Quintana is 2-2 with a 3.18 ERA in six career games (five starts) against the Yankees.

He is coming off a no-decision last Tuesday when he gave up one run in six innings, with six strikeouts and two walks, against Washington.