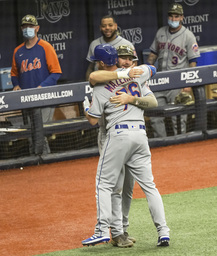 Two-run homers by Margot in the fourth and by Adames in the fifth built a 4-0 lead, and Lowe led off the sixth with his seventh home run this season.

"It's a good feeling to show some offense, especially the way we've been going the last week or so," said Adames, who is hitting .198. "When your team starts hitting like this it's contagious. It's good to know things are going in the right direction."

Ji-Man Choi had three hits, including an eighth-inning RBI double, in his first game after recovering from arthroscopic right knee surgery.

Josh Fleming (3-3) allowed up one hit in five scoreless innings, an infield single by Jeff McNeil leading off the game. Fleming left after 53 pitches and retiring his last nine batters.

"It was tough, but I get it," he said. "I'm not going to sit there there and argue my point. That's the way it works for us. If we can throw this well and give the ball to the bullpen, I get it."

Patrick Mazeika, who replaced McNeil, homered off Diego Castillo in the sixth for his first major league hit, in his sixth big league at-bat.

The three homers off Stroman matched the total he gave up in his first seven starts.

"I didn't have it today," he said. "I threw a pitches that maybe flattened out a bit. I made a few mistakes and they made me pay for them."

New York was swept after arriving with a seven-game winning streak.

Tampa Bay has won four in a row, one shy of its season high.

"We're having fun right now," said Fleming, who got 11 swings-and-misses in his second scoreless start this season. "Everyone's hitting and things are starting to come together."

Mets right fielder Michael Conforto left in the middle of the first inning after grounding into a double play and McNeil came out for a pinch hitter in the third inning.

The Mets said Conforto had a tight right hamstring.

"Hamstring issues are no joke," Mets manager Luis Rojas said. "We're going to get some tests, MRIs. When you're talking about hamstrings you get concerned. We are going to wait for the results and then figure out a timeline."

McNeil has a tight left hamstring.

"It just grabbed on me a little bit," McNeil said. "Nothing bad, but something we have to look at. Nothing too major, just some tightness. There's just something there."

Mets: RHP Jacob deGrom (right side tightness) hopes to throw a bullpen session Tuesday before the Mets determine when he can return to the rotation. ... OF Brandon Nimmo (left index finger bone bruise) will travel with the team to Atlanta but will not play until he can swing pain-free.

Rays: RHP Chris Archer, who has not pitched since April 10 due to right forearm tightness, has resumed throwing. No rehab plan is in place yet, but manager Kevin Cash said Archer is likely to need rehab starts at Triple-A Durham.