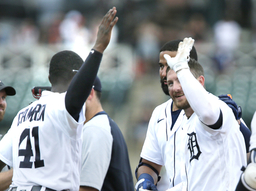 DETROIT (AP) Robbie Grossman's squeeze bunt in the 10th inning drove in the winning run and the Detroit Tigers won a duel of small ball, beating the Houston Astros 2-1 Sunday for a split of their four-game series.

The Tigers (34-44) went 5-2 against Houston (48-30) this season. There were a total of only seven hits in their final meeting this year, and Detroit needed just three to win.

"We can walk into the clubhouse knowing we just split with those guys, and we could have won three of four," Grossman said. "That's a great feeling."

Tigers manager A.J. Hinch isn't surprised his current team, which improved to 26-25 since May 1, has been able to beat his old one.

"This just confirms what we tell these guys every day -- this is a good baseball team," he said. "We were terrible in April, and we don't need to revisit that, but now we are competitive against good teams and good pitching."

"We had a lot of chances in this series, and we didn't take advantage of them," Astros manager Dusty Baker said. "A lot of that is the Tigers, though. They pitched well enough to beat us."

Houston brought in Blake Taylor (0-2) for the bottom of the inning with Akil Baddoo starting on second. Jonathan Schoop's groundout moved the winning run to third for Grossman.

Grossman bunted Taylor's first pitch to the third-base side of the mound and Baddoo beat Taylor's desperate flip.

"I didn't quite get the ball where I wanted it, but I made the pitcher field the ball," Grossman said. "That's all we needed with Akil's speed."

The play was Detroit's first game-winning bunt since John Hicks drove in JaCoby Jones in the 12th inning of a 3-2 win over the Tampa Bay Rays.

"We're playing to the strengths of the personnel we've got on the roster," Hinch said. "We're trying to find ways to win games, and that one worked out."

Houston starter Jake Odorizzi allowed two hits and a walk in five innings. In his last three outings -- two starts and a long-relief performance -- he has given up four hits and two walks in 14 scoreless innings, striking out 15.

"Everyone wants more innings, but I'm just happy with the results I'm getting right now," he said. "If I can keep giving us chances to win games, I'll be happy."

Tigers starter Tarik Skubal yielded one run on one hit and three walks in seven innings, striking out nine.

"I've never faced them before, but I obviously know what they can do against left-handed pitching," he said. "The White Sox are tough on lefties, so I took a lot of that approach into this game."

The Astros loaded the bases with one out in the fourth, but Skubal was able to escape with only a sacrifice fly by Carlos Correa. It was Correa's fifth RBI of the series.

"We had that young man in a lot of trouble in that inning, and he got right back out of it," Baker said. "I don't know what round they got him, but he's as good as any young pitcher we've faced this season."

Cristian Javier walked Willi Castro and Zack Short with one out in the Detroit seventh, but got Jake Rogers to pop out. Baker brought in Brooks Raley, and Baddoo tied the game with a soft single to right.

Both teams had two runners on in the eighth, but couldn't bring home the go-ahead run.

"Our bullpen really stepped up today," Hinch said. "(Jose) Cisnero gets the strikeout of (Yordan) Alvarez to end the eighth, and then we got two great innings from Soto."

The Tigers kept Short, who had been called up as the 27th man for Saturday's doubleheader, optioning INF Isaac Paredes to Triple-A Toledo. They also placed RHP Michael Fulmer (cervical spine strain) on the 10-day injured list and recalled LHP Miguel Del Pozo from Toledo.

Astros: Return home for a three-game series against the Baltimore Orioles. Houston is scheduled to start Zack Greinke (8-2, 3.56) on Monday while the Orioles have not announced a starter.