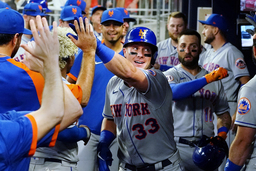 Morton had pitched 20 2/3 consecutive scoreless innings before McCann took him deep into the seats in left-center with no outs to make it 3-all. Minter (1-3) entered and gave up a one-out double to pinch-hitter Jose Peraza and a two-out single by Lindor to put the Mets up 4-3.

"You had to commit to one pitch, and I think that's what the guys did in the seventh," New York manager Luis Rojas said. "McCann sat on that pitch and he got it and delivered the three-run homer. Peraza was great off the bench off the lefty and then Lindor with a clutch two-out hit."

Edwin Diaz recorded his 17th save in 18 chances by retiring pinch-hitters Ehire Adrianza and Pablo Sandoval on flyouts before getting Ronald Acuna Jr. to pop up in the ninth.

The Mets have occupied first place in the NL East since May 8, but they had dropped nine of 14 and have a three-game lead over surging Washington. New York had scored one run off starting pitchers over the last six games before McCann hit his seventh homer.

"It's not one guy who comes up with big hits over and over," McCann said. "It's a whole team effort. You can really go up and down the lineup and this guy's gotten a big hit here, this guy's gotten a big hit there. We truly believe in each other and we truly believe that any given day any guy can get the job done. We pull for each other and we have each other's backs."

Drew Smith (3-1) earned the win after facing five batters in the sixth.

Morton faced trouble in the seventh when Dominic Smith began the inning with a single and advanced on a walk to Kevin Pillar, but the Mets, who rank last in the major leagues in runs scored, quickly rallied on Lindor's single.

Morton allowed five hits, three runs and one walk with seven strikeouts in six-plus innings. The 37-year-old was bidding for his third straight scoreless start.

"He went 78 pitches," Braves manager Brian Snitker said of Morton as he entered the seventh. "I was kind of hoping maybe he may go out there and do two more even. It wasn't tough at all (to stick with him)."

Megill gave up five hits, three runs and two walks with eight strikeouts in five innings. He allowed a two-out single in the fifth to Acuna, who advanced to third on Freddie Freeman's single. Albies followed by going deep for the 13th time, his ball landing in the Braves' bullpen in right-center, and Atlanta led 3-0.

Morton began the game by hitting Jeff McNeil with a pitch. McNeil advanced on a sacrifice bunt, but got no farther as Morton retired the next 10 batters he faced. Michael Conforto singled with one out in the fourth for the Mets' first hit, and Morton struck out Smith to end the inning.

Megill, who struck out the side in the first, escaped a jam in the second. Austin Riley singled to begin the inning, advanced on a walk and moved to third on a flyout, but failed to score when left fielder Smith made a diving catch to his left.

Braves: LHP Max Fried will return to the rotation Wednesday after missing one turn with a blister on his index finger. Snitker said the blister has completely healed.

The Mets recalled rookie LHP Thomas Szapucki from Triple-A Syracuse before the game and designated RHP Jerad Eickhoff for assignment.