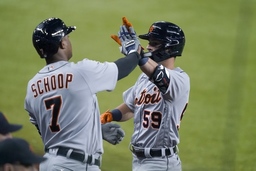 No. 9 batter Zack Short homered for the Tigers, who have won three in a row and five of six. Former Rangers outfielder Nomar Mazara twice drove in a run without a hit.

Peralta (2-1), back in the majors only three weeks, struck out six without a walk while throwing 61 of 91 pitches for strikes. The right-hander allowed only three hits in his fourth start for Detroit.

"I know that if I'm healthy 100%, I'm going to be able to do my job, and that's what I'm doing right now. I'm thankful to the team for this opportunity," Peralta said. "I just need to get used to (starting) again, and right now I feel very comfortable."

Kolby Allard (2-5) struck out a career-high nine in his 5 1/3 innings, and only two of the five runs scored against the Texas lefty were earned.

"Outside of Kolby and a couple of homers in the ninth, that was probably our worst game of the year," Rangers manager Chris Woodward said. "We didn't really stick to the plan we talked about with Peralta. He was good, don't get me wrong. He mixed up his speeds and executed some pitches."

The 32-year-old Peralta was released by Kansas City midseason two years ago and spent all of 2020 as a free agent before going to spring training this year with the Tigers on a minor league deal and starting the season at Triple-A Toledo.

"He was late to camp, and didn't get an opportunity, but hung with us until we needed him, and it's big for him and big for our team," Tigers manager A.J. Hinch said. "Hard to complain about anything that's he's doing right now."

Detroit went ahead to stay in the fourth when Miguel Cabrera had a leadoff single and later scored as Mazara reached on a fielder's choice grounder.

The Tigers scored five times in the sixth, the first two runs coming when first baseman Nate Lowe was charged with two errors on a ball hit by Mazara with the bases loaded. Lowe misplayed the grounder, then tossed the ball toward an unoccupied first base, allowing another run to score and ending Allard's night.

Willi Castro had a RBI sac bunt on the first pitch by reliever Brett Martin, and two pitches later Short's second homer of the season was a two-run shot that made it 6-0. Short, who had struck out in six consecutive at-bats before going deep, added a sac fly in the eighth.

Gold Glove-winning right fielder Gallo made a leaping catch at the wall when rookie Akil Baddoo hit the first pitch of the game toward the right field corner. ... Detroit was 0-6 against the Rangers in 2019, and didn't face them last season.

HALE BACK TO COLLEGE

Third base coach Chip Hale worked his final game with the Tigers. He was named Monday as the new head coach at Arizona, his alma mater where he was part of a national championship as a player in 1986. He will be introduced Tuesday on the Tucson campus. "I asked him to work tonight so that we can stabilize things," Hinch said. Bench coach George Lombard will take over as third base coach at least until the All-Star break.

Tigers: CF Daz Cameron was scratched from the lineup with a sprained big right toe after he crashed into the wall when tracking flyballs during pregame batting practice. Baddoo replaced Cameron in center.