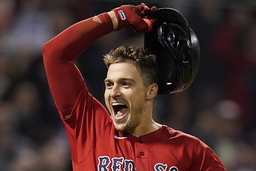 BOSTON (AP) Back in raucous Fenway Park for postseason baseball a year after a last-place finish, the Boston Red Sox are getting the bounces, knocking big hits in bunches and even benfiting from a little small ball.

Hardly a perfect team, even by their own estimation, Alex Cora and the wild-card Red Sox are four wins from a return to the World Series anyway.

Kike Hernandez delivered Boston's second straight walk-off win, scoring pinch-runner Danny Santana with a sacrifice fly in the ninth inning to send the Red Sox to the AL Championship Series with a 6-5 win over the Tampa Bay Rays on Monday night.

After winning Game 3 of their best-of-five AL Division Series on Sunday with Christian Vazquez's two-run homer in the 13th, Boston took Game 4 for its first set of back-to-back walk-off postseason wins since 2004 ALCS Games 4 and 5, both from David Ortiz against the Yankees.

"We always said we had a good baseball team that had some holes, and we still have some holes, but at the end, for how bad it looked sometimes, we're still here. We're still in the dance," Cora said.

Rafael Devers had a three-run home run off rookie Shane McClanahan to ignite a five-run third inning that put Boston in front 5-0. Tampa Bay battled back and tied it in the eighth.

The wild-card Red Sox will await the winner of the other ALDS matchup between the Houston Astros and Chicago White Sox. Houston leads 2-1 going into Game 4 in Chicago on Tuesday, a makeup of Monday's rainout.

"Since day one, you guys believed in this group," Cora told his players before setting off a bubbly clubhouse celebration.

Boston improved to 15-3 in potential clinching postseason games since 2004 and have won each of their last eight. It's their first under second-year chief baseball officer Chaim Bloom, who came over from the Rays before the 2020 season and promptly oversaw the unpopular trade of Mookie Betts.

With Cora rehired last offseason following a one-year suspension for his role in the Astros' cheating scandal, the retooled Red Sox are four games from the World Series a year after finishing last in the AL East.

The 2018 champs have needed a little luck. Vazquez's homer Sunday came half an inning after Tampa Bay missed out on the go-ahead run on a bizarre ground-rule double that bounced off right fielder Hunter Renfroe and over the outfield fence.

That all followed a Game 2 rout in which Boston slugged a franchise postseason-record five homers in a 14-6 drubbing. The Red Sox hit .341 as a team with nine homers and a .915 OPS in the series.

For the Rays, it's an abrupt end to aspirations of back-to-back trips to the World Series after winning 100 games during the regular season and rolling to the AL East title.

"There's no doubt there's disappointment," Tampa Bay manager Kevin Cash said. "We had high aspirations to get deep into this thing. We ran into a Red Sox team that they just beat us - no other way around it. They got the big hits."

The Red Sox are the second team to clinch a postseason series with consecutive walk-off wins. The other was the Minnesota Twins in the 1991 World Series, according to STATS.

Vazquez led off the ninth with a single to left field and moved to second on a sacrifice bunt by Christian Arroyo. Travis Shaw hit a bouncing ground ball to third that went for an infield single when Yandy Diaz bounced his difficult throw to first baseman Ji-Man Choi. Vazquez got to third and Santana entered to run for him.

Hernandez, who was 9 for 20 in the series, scored Santana with a fly ball to left.

"I had the chance to win the game last night and I didn't do it," Hernandez said. "I was thinking, walking to the plate, I was like, `I'm about to finish this game.'"

Rays postseason star Randy Arozarena ripped a tying single with no outs in the eighth inning off Ryan Brasier and advanced to second on the throw. Garrett Whitlock relieved and got through the eighth without further damage, then pitched a scoreless ninth for the victory.

"Once AC said you've got to keep going, that's all I was focused on," Whitlock said.

Red Sox starter Eduardo Rodriguez allowed two runs and three hits with six strikeouts over five innings, plus one batter. It was redemption after he lasted just 1 2/3 innings and gave up two runs in Boston's 5-1 loss in Game 1.

Devers finished with three hits. Wander Franco had a two-run homer for Tampa.

The Red Sox led 5-0 after three but Tampa pulled within 5-3 on Austin Meadows' RBI single in the fifth and Franco's two-run homer in the sixth off Tanner Houck.

After being solid on the mound throughout 2021 and in a Game 1 win, Tampa's pitching struggled over the last three games, with the Red Sox outscoring the Rays 26-15.

Right-hander Collin McHugh was the opener Monday and pitched two scoreless innings, allowing one hit before handing the ball off to Game 1 starter Shane McClanahan.

The rookie was pitching on three days' rest and coming off a strong performance in which he earned the win after pitching five scoreless innings.

Boston had his number this time.

McClanahan quickly gave up a single Vazquez and walked Kyle Schwarber. He seemed on his way to getting out of trouble after he got Hernandez to fly out for the second out of the inning.

But Devers jumped all over a first-pitch fastball and launched a line drive into the first row of the center field bleachers.

Xander Bogaerts singled. That was followed by Verdugo's double off the Green Monster that scored Bogaerts. J.D. Martinez kept it going with a single off the Monster that brought Verdugo.

"Down 5-0 nothing in the third inning, that was pretty devastating," Cash said. "We claw back in it and we came up short tonight."

Red Sox: Manager Alex Cora said reliever Hansel Robles, who gave up a solo home run to Franco and game-tying double in Game 3, remained under the weather ahead of Monday's game.

Boston will hit the road for the ALCS opener Friday night.