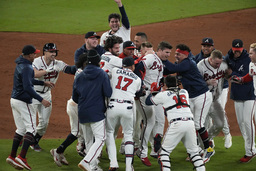 ATLANTA (AP) A couple of clutch swings from breakout slugger Austin Riley got the underdog Atlanta Braves off to a fast start in the NL Championship Series.

Riley homered and drove in the winning run with a single in the bottom of the ninth inning to give Atlanta a 3-2 victory over the Los Angeles Dodgers in Game 1 on Saturday night.

Blake Treinen struck out Freddie Freeman to open the ninth before giving up Ozzie Albies' bloop single to center field. Albies stole second and Riley followed with his line drive into the left-field corner.

"That was my mindset - put something in play and see what happens," Riley said after delivering the first walk-off hit of his career.

The 24-year-old slugger spread his arms in celebration as he rounded first base before getting mobbed by teammates in a happy swarm that carried into shallow center field.

"You dream of that as a little kid," Riley said.

Albies told first-base coach Eric Young Sr. he would be taking off to steal second so he could get in scoring position.

"I knew (Riley) was going to do the job," Albies said.

"As soon as he hit it, I took off. I started yelling, screaming all the way to home plate."

Riley also homered in the fourth. The third baseman set career highs across the board for NL East champion Atlanta this year in his third major league season, batting .303 with 33 homers, 107 RBIs and an .898 OPS in a league-leading 160 games.

"He's come a long way in a short time, I feel like. Even last year, I think that he didn't have all these tools. He can beat you in so many ways now, and he always had that power, but now he's putting together such good at-bats," Dodgers infielder Trea Turner said.

"He's a polished hitter and hats off to him because I think he's gotten to the point where he's been a really good player and there's a reason why fans are chanting MVP for him."

Riley's big game was especially important as Braves first baseman Freddie Freeman struck out four times against four different Los Angeles pitchers after having only one four-strikeout game in the regular season.

"I think that kid has definitely taken the next step forward," Snitker said.

The teams are meeting in the NL Championship Series for the second consecutive season. The Dodgers rallied from a 3-1 deficit to win last year's playoff in seven games before also winning the World Series.

Game 2 is Sunday night in Atlanta before the series shifts to Los Angeles.

The wild-card Dodgers wasted a scoring opportunity in the top of the ninth. Will Smith got two outs before walking Chris Taylor. Pinch-hitter Cody Bellinger hit a soft single to right field, but Taylor got caught and tagged out in a rundown between second and third that started with right fielder Joc Pederson's throw to shortstop Dansby Swanson.

"I thought if he would have kept going, he might have had a chance at third," Riley said. "But that was a great play by Dansby. Just being able to get out of that inning there was huge."

Corey Knebel worked one inning as the Dodgers' opener in a bullpen game, giving up one run. Eddie Rosario led off with a single, stole second, moved to third on Albies' groundout and scored on Knebel's wild pitch to Riley.

The Dodgers, who won 18 more games than Atlanta during the regular season, pulled even in the second on AJ Pollock's two-out double and Taylor's RBI single.

Will Smith's homer in the fourth, his third of the postseason, gave the Dodgers a 2-1 lead. Riley's two-out homer off Tony Gonsolin in the fourth tied it.

The Dodgers outhit the Braves 10-6 but left runners on base in each of the first seven innings except the fourth. Los Angeles hitters were 1 for 8 with runners in scoring position.

"We prevented runs all night. So we didn't not win the game because we didn't prevent runs," Dodgers manager Dave Roberts said. "We just didn't get the hits when we needed."

No Braves pitcher posted a perfect inning until the eighth, when Luke Jackson got three consecutive outs.

Justin Turner, who was 2 for 24 in the Dodgers' first two postseason rounds, had one hit. Albert Pujols was held without a hit on three groundouts before popping out in the ninth.

Braves starter Max Fried gave up two runs and eight hits in six innings. He threw 23 consecutive strikes, the most in a postseason game in 20 years, according to the Elias Sports Bureau.

"I don't know that Max really felt like he was on tonight," Snitker said. "Max just kept pitching."

Snitker was surprised to learn his hitters had 14 strikeouts in the game.

"I had no idea we struck out that many times," he said. "I'm not sitting there with a clicker."

Scherzer was tentatively scheduled to start Game 1 even though he earned his first career save to close out Thursday night's deciding Game 5 of the Dodgers' NL Division Series win over San Francisco. He was pushed back because he expects to be at full strength following another day of rest.

Scherzer has pitched 12 1/3 innings over three appearances in the playoffs, allowing two runs and six hits with 16 strikeouts. Scherzer, who pitched for Washington for six-plus seasons in the NL East before he was traded to the Dodgers this season, is very familiar with the Braves' lineup, which he said "first and foremost starts with Freddie Freeman."

"Hands down, he's the best hitter I've had to face," Scherzer said. "And I love facing him because that's who you measure yourself against when you have to face the best."

Anderson is 3-0 with a 0.76 ERA in five career postseason starts. He pitched five innings, allowing only three hits without a walk, in a 3-0 win over Milwaukee in the Division Series.