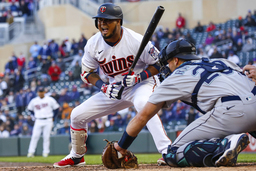 MINNEAPOLIS (AP) Reigning AL Cy Young Award winner Robbie Ray was through six innings Friday with a manageable pitch count. But a short spring training had left pitchers without time to build up their endurance, as Seattle manager Scott Servais was keenly aware.

So Servais told the new Mariners left-hander that he had three more hitters. Ray obliged with another quick inning - becoming the first starter to pitch seven this season - in an impressive debut.

Ray (1-0) surrendered just three hits, walked four and struck out five, and Mitch Haniger homered as Seattle opened with a 2-1 win over the Minnesota Twins.

"Can't say enough how impressed I was with him today and how we went about his business," Servais said. "I think he and I are going to have quite a few conversations toward the end of games as it goes along, and I look forward to it. Great competitor, really excited to have him on the team."

Ray made the opening day start after leaving Toronto and signing a five-year, $115 million contract with Seattle.

"I told Skip I was ready," Ray said. "He said, `You got three batters.' I said, `Done.' I felt really good, still felt strong going into that seventh inning. So, really happy to get through it."

Haniger is the longest-tenured Mariners player, having started with them in 2017. He connected for a two-run homer in the first inning off rookie Joe Ryan.

Drew Steckenrider allowed a leadoff hit in the ninth but secured the save after Gary Sanchez hit a towering flyball to the left-field wall.

"I thought it was gone, but today wasn't the day," Sanchez said through a translator.

Carlos Correa singled in his first at-bat for Minnesota after signing his surprise three-year, $105.3 million contract. He added a diving stop at shortstop to save a run, but he and Byron Buxton - who got a seven-year, $100 million extension in the offseason - combined to leave eight runners on as the first two batters in the lineup.

"Ray's one of the best pitchers out there, and he made good pitches," Twins manager Rocco Baldelli said. "Those are the guys we want up there in those spots every time. We got what we wanted, and we'll take our chances every time with Buck and Correa coming up right there."

Gio Urshela, who arrived in the trade that sent Josh Donaldson to the New York Yankees, hit a solo homer for the Twins.

Ryan (0-1) struggled with his control on a chilly day in Minnesota.

The original opener Thursday was pushed back a day because of a rain-snow mix and cold temperatures. The sun was shining Friday but the first-pitch temperature was 45 degrees.

Ryan, who walked five and didn't hit a batter in 26 2/3 innings last year, walked four and hit a batter against the Mariners. He gave up two hits and two runs in four innings while becoming the first Twins rookie to start on opening day since Tom Hall in 1969.

"Maybe a little bit too much nibbling," Ryan said. "I wouldn't say too much rookie nervousness. I think just first game back out, I just try to be a little too fine sometimes. But whatever, live and learn."

The Mariners signed shortstop J.P. Crawford to a $51 million, five-year contract before the game.

Crawford, 27, had agreed last month to a $4.85 million, one-year deal and would have been eligible for free agency after the 2024 season. He's been a standout defensive player since being acquired by the Mariners before the start of the 2019 season. He won a Gold Glove in 2020 and was a finalist for the award last season.

After getting Chris Paddack in a trade from the San Diego Padres, Baldelli confirmed that the team will go with a six-man rotation, at least in the early part of the season. Joining Ryan and Paddack are Sonny Gray, Bailey Ober, Dylan Bundy and Chris Archer.