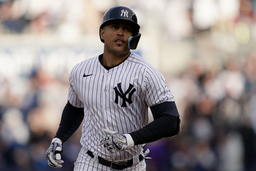 NEW YORK (AP) Giancarlo Stanton became the first player to homer against Boston in six straight games, hitting a tiebreaking, two-run drive in the sixth inning that gave the New York Yankees a 4-2 win over the Red Sox on Saturday.

Anthony Rizzo homered for the second straight day to start New York's comeback from an early deficit, a tying two-run drive in the fourth.

Luis Severino made his first start for the Yankees since the 2019 AL Championship Series as the Yankees improved to 2-0 for the first time since 2018.

Stanton broke a 2-2 tie when he drove an 0-1 slider from Nick Pivetta (0-1) into the first row of the left field bleachers, a 437-foot drive over Boston's bullpen.

"We're talking about just a great hitter, a great power hitter," Boone said. "Dating back now, he was in a pretty locked in place and when G gets locked in, that's what happens. "

"Just fortunate to get some balls over the plate and be on time and get the barrel to it," Stanton said. "I can't say it's the rivalry or anything. I'm doing my homework and I'm getting the ball over the plate."

After opening as a designated hitter Friday, Stanton played right field. Stanton hit nine of 35 homers last year in 16 games as an outfielder.

"I can't tell you why I hit them when I'm playing outfield or DH," Stanton said. "It's just a different rhythm to the game. I got to be able to master both of them because I'm going to do both."

Alex Verdugo hit a two-run homer in a 31-pitch second inning off Severino, who returned late last season from Tommy John surgery. The 28-year-old All-Star right-hander, a 19-game winner in 2018. allowed five hits in three-plus innings, struck out five and walked none. He threw 65 pitches, including 35 four-seam fastballs that averaged 97.8 mph.

"It's been a long time, but I remember very well how it feels." Severino said. "I was just trying to feel relaxed."

Six relievers followed Severino with a hitless inning each.

Ron Marinaccio, a 26-year-old right-hander, stranded an inherited runner in the fourth in his major league debut. Lucas Luetge (1-0) pitched the sixth, and Aroldis Chapman worked around a throwing error by new shortstop Isiah Kiner-Falefa for his first save.

Boston and went 0 for 10 with runners in scoring position and dropped to 0-2 for the second straight season. Last season the Red Sox opened with three straight losses at home to Baltimore, won nine in a row and held a share of first place in the AL East for 85 days.

"It's just my mistake right there," Pivetta said of the Stanton homer. "It just came out of my hand in a weird way and it was a hanger."

Rizzo homered after center fielder Kike Hernandez made a leaping catch at the center field fence to rob Aaron Judge of an extra-base hit. Judge's drive would have been a home run in 21 ballparks.

Boone went to to the mound because Severino left the Pitch Com signaling device in the dugout. An inning earlier, Severino appeared to experience trouble hearing the signs in the device during the at-bat to Vazquez. He had the cup his ears to hear the signal because of the two-strike siren blaring from the sound system.

Marinaccio relieved Severino in the fourth, began his career by walking Trevor Story and got two strikeouts after a pep talk from Rizzo.

A native of Toms River, New Jersey, Marinaccio said his parents, brother, fiancee and over 100 friends were in the stands.

Marinaccio became the fourth player born in Toms River to appear in the majors and the third for the Yankees. The others were Al Leiter and Andy Messersmith.

"I love his makeup, and so I knew he'd get through it," Boone said.

Red Sox: SS Xander Bogaerts went 0 for 3 with three strikeouts and a walk after exiting Friday's game with a tight right hamstring. . RHP Matt Barnes (tight back) said he is feeling better. Barnes was unavailable Friday after tweaking his back during Thursday's workout. . LHP Josh Taylor (strained back) will throw batting practice next week at the spring training complex in Fort Myers.