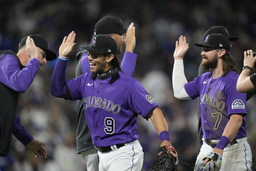 DENVER (AP) Connor Joe considered this homer, this moment, one of the top highlights of his burgeoning career.

It's easy to understand why.

Diagnosed with testicular cancer while with the Los Angeles Dodgers organization in 2020, he underwent surgery and treatment before signing with the Colorado Rockies following that season. He's been a fan favorite since his arrival at Coors Field - and even more now.

Joe drove in two runs, including a go-ahead solo homer in the eighth inning, and closer Daniel Bard struck out the side in the ninth to help the Rockies beat the Dodgers 3-2 on Saturday night.

"It was awesome," Joe said of his big moment, with Kris Bryant greeting him in the dugout with a hug following his homer. "Opening weekend. Playing the Dodgers. Just the excitement of being in Coors. It's great, in front of the fans."

Joe lined a cutter from reliever Blake Treinen (0-1) into the seats in left-center. The Rockies first baseman also had an RBI single in the sixth.

His big night gave the Rockies a split of the opening two games. They have a chance Sunday to win a home series against the Dodgers for the first time since August 2018.

"He'll remember that," Rockies manager Bud Black said. "For sure. That was a good one."

That wasn't a 1-2 pitch Treinen wanted to make.

"Baseball sucks sometimes," Treinen said. "Everything was going great, just obviously with Connor, I left one over the middle.

"Tomorrow is a new day and I'll try to get my mind ready for the next time my name is called."

Ryan McMahon also came through in the first when his single scored Bryant, whose slide at the plate knocked the ball out of catcher Austin Barnes' glove.

It was a shaky night for reliever Alex Colome in his Rockies debut. Mookie Betts delivered a run-scoring single off Colome to tie it at 2 in the eighth. Jose Iglesias nearly made a difficult over-the-shoulder-catch in shallow left on Betts' blooper, but it bounced off his glove and allowed Gavin Lux to score.

Freddie Freeman almost followed with a homer, only to have his deep shot hauled in at the center-field wall by Sam Hilliard.

Colome gave way to Carlos Estevez (1-0), who retired Max Muncy with the bases loaded to end the threat. Bard fanned Justin Turner, Edwin Rios and Cody Bellinger to earn the save.

German Marquez flashed his All-Star form on a balmy night as he scattered three hits over seven strong innings. His only mistake was a four-seam fastball that Barnes lined for a homer in the third.

The hard-throwing Marquez walked none and struck out five.

"He was great. He was fantastic," Dodgers manager Dave Roberts said of Anderson, who went four innings. "He gave us a chance to win."

Turner made the catch of the night at third base for Los Angeles, when he reached over the railing of the Dodgers' dugout to snare Charlie Blackmon's foul ball.

Dodgers shortstop Trea Turner had an infield single in the eighth to extend his hitting streak to 21 games dating to last season. His streak through the regular season began Sept. 12.

The Rockies brought back retired first baseman Todd Helton to serve as a special assistant to general manager Bill Schmidt. Helton spent 17 seasons with the organization and is the franchise leader in games played, runs, hits, doubles, homers and RBIs.

"I'm glad Todd is jumping back in," Black said. "I think it's good for Todd to get reconnected to our organization."

Rockies: RHP Antonio Senzatela pitched six or more innings in 16 of his last 21 starts. He signed a five-year contract in October.