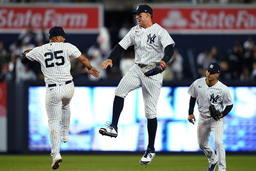 NEW YORK (AP) Aaron Hicks hit a go-ahead two-run homer and made a jumping catch in his first left-field start in four years, leading the New York Yankees over the Toronto Blue Jays 4-0 on Tuesday night.

New York scored first for the first time in five games this season when Hicks drove a 2-0 slider from Yusei Kikuchi (0-1) into the right-center field seats in the second inning, Hicks' first home run since last April 30.

"I hit it well but I didn't think it was going to go out," Hicks said. "I thought I might be able to get it off the wall or at least be able to have a sacrifice fly."

Nestor Cortes and four relievers combined on a five-hitter, quieting a Blue Jays' offense that produced 23 runs and 38 hits in the first four games.

Hicks, who didn't play after May 12 last year because of wrist injury that needed surgery, had not started in left since Sept. 29, 2017.

With two outs and none on in the second, the Yankees moved second baseman Gleyber Torres to near the left-field line with Matt Chapman at the plate as part of a four-man outfield that saw Hicks stationed in left-center.

Hicks took a step in and made a slight jump for the catch.

"Just my first route, it was kind of shaky in the beginning, but once I started to get a little bit more comfortable out there, it was all right, " Hicks said. "The four-man outfield kind of messed me up but overall, I felt like it was pretty good."

"About gave me a heart attack there," manager Aaron Boone said with a laugh. "The four-man worked well there because we were well-positioned, but I think he misread it and turned it into a good catch to hang on."

Then in the bottom half, the switch-hitter's drive from the right side of the plate ended the Yankees' 15-inning scoreless streak.

Cortes allowed three hits in 4 1/3 innings, struck out five and walked none. The fastest of his 72 pitches was 93.6 mph.

"It's fun to compete against them," Cortes said. "They're really good hitters. I respect them and I just go out there and do a job."

Clay Holmes (1-0) followed with 1 2/3 hitless innings, Miguel Castro worked around a two-hit error in the seventh and Jonathan Loaisiga needed one pitch to retire Vladimir Guerrero Jr. to strand two in the eighth.

Aroldis Chapman, throwing at up to 100.8 mph, struck out two in the ninth.

New York added a run in the fourth when DJ LeMahieu scored from second on a throwing error by catcher Tyler Heineman, whose pickoff attempt sailed over Guerrero at first and into right field.

Giancarlo Stanton hit a 116.2 mph sacrifice fly in the eighth.

Left fielder Lourdes Gurriel Jr. made a leaping catch on Aaron Judge in front of the fence after Josh Donaldson opened the game with a walk. Donaldson was thrown out at the plate by right fielder Teoscar Hernandez's one-hop throw on Anthony Rizzo's double.

SS Anthony Volpe, the 30th overall pick in the 2019 amateur draft, was 0 for 3 with three strikeouts in his home debut with the Double-A Somerset Patriots of the Eastern League. He is off to a 3 for 15 start,

YANKEES: An MRI on LHP Jordan Montgomery's knee came back clean and he is expected to make his next start Friday in Baltimore. Montgomery was hit on a knee by Xander Bogaerts' 103 mph comebacker Sunday.

Blue Jays: RHP Jose Berrios (0-0, 108.00 ERA) retired one of the seven batters he faced, allowing four runs and three hits Friday against Texas. He threw 34 pitches in the shortest outing of his career.

Yankees: RHP Gerrit Cole (0-0, 6.75) allowed all three runs before getting a single out and pitched four innings Friday against Boston. "I just had a lot of adrenaline and kind of spun my tires there for a minute, so I needed to find the rhythm and tempo to kind of stay within myself a little," Cole said Tuesday.