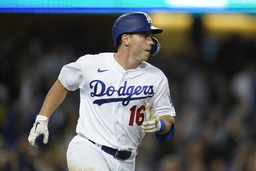 LOS ANGELES (AP) Freddie Freeman stood on second base, removed his helmet, patted his heart with it and nodded his head in appreciation.

The crowd of 52,995 was chanting "Freddie! Freddie!" for, of all things, a ground-rule double by the newest Dodger.

"I usually don't get that at Dodger Stadium," a smiling Freeman said.

Freeman scored the go-ahead run on Trea Turner's single and Will Smith added a three-run homer in the eighth inning, rallying Los Angeles past the Cincinnati Reds 9-3 on Thursday in just the second night home opener in Dodger Stadium history.

Freeman's family, including his father and grandfather, cheered in a suite for the slugger who returned home to Southern California in March when he signed with the Dodgers after spending his entire career in Atlanta.

"It was a nice welcome home for Freddie. That was their way of putting their arms around him," Roberts said. "You could tell he was getting emotional. He kind of wears his emotions on his sleeve and I think our fans appreciate that."

Freeman certainly wasn't getting any affection in LA last season. He and the Braves beat the Dodgers 4-2 in the NL Championship Series and Atlanta went on to win the World Series.

But now he's part of the home team.

Freeman's hit to deep left-center off Justin Wilson (0-1) led off the inning. He had extra time to soak up the applause while the Reds made a pitching change.

"That's as special as it gets right there," Freeman said. "For the fans to be able to create a moment for me in the eighth inning is something I'll never forget."

Turner followed with a single to right off Tony Santillan, sending Freeman charging home to give the Dodgers a 4-3 lead.

After taking a 3-0 lead in the first, the Dodgers went begging until scoring six runs in the eighth when they batted around.

Justin Turner walked, Trea Turner took second and both moved up on Santillan's wild pitch. After Max Muncy struck out, Smith blasted his shot to center. The ball hit the wall and then ricocheted off the glove of Jake Fraley and back into the park as the crowd erupted.

Blake Treinen (1-1) to the win with one scoreless inning of relief.

Freeman ignited the Dodgers' offense in the first with the first of five consecutive singles off Reds starter Luis Cessa. Trea Turner, Justin Turner, Muncy and Smith were part of the hit parade.

The Reds tied it 3-all on Brandon Drury's two-out homer off David Price in the seventh. Drury came in as a defensive replacement for 2021 NL Rookie of the Year Jonathan India, who got hurt in the fifth.

The Reds closed to 3-2 in the fifth on Aristides Aquino's two-run homer, just his second hit of the season. The left fielder struck out in his first two at-bats.

Dodgers starter Walker Buehler got yanked and promptly threw his glove against the dugout wall. He allowed two runs and five hits in 5 2/3 innings. The right-hander struck out four and walked three.

Cincinnati slugger Joey Votto doubled in the second, snapping an 0-for-11 skid.

Reds: 2B India left with a right hamstring injury after legging out a base hit. ... OF Tommy Pham (hand) could return Friday. He missed his second straight game after colliding with Nick Senzel in the outfield.

The Reds and Dodgers played the first game at Dodger Stadium on April 10, 1962. The ballpark is the third-oldest in the majors and is hosting the All-Star Game in July.

The Dodgers began their season-long anniversary celebration by having Hall of Fame broadcaster Jaime Jarrin, in his 64th and final year as the team's Spanish-language voice, throw out the first pitch.

Two F-35 fighter jets roared over the field and members from all six military branches unfurled a giant American flag.

Reds: RHP Vladimir Gutierrez (0-1, 4.15 ERA) starts Friday on Jackie Robinson Day around the majors. His career ERA in the first inning is 8.61 and 3.78 in subsequent innings.