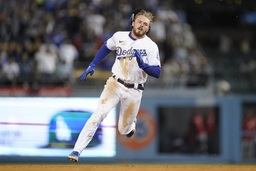 Trea Turner extended his hitting streak to 26 games with an RBI triple and Gavin Lux scored two runs while reaching base three times in the Dodgers' 3-1 victory over the Cincinnati Reds on Friday night.

Chris Taylor had an early run-scoring triple as the Dodgers punctuated Jackie Robinson Day with their fourth consecutive win in front of a sellout crowd, including thousands wearing giveaway replicas of Robinson's first Brooklyn jersey. The victory capped a long day of celebrations, community appearances and discussion of Robinson's baseball legacy.

While Turner and Lux provided most of the important moments at the plate, Tony Gonsolin and Tyler Anderson (1-0) pitched four solid innings apiece for the Dodgers while teaming up for long appearances in the same game for the second time this season.

"It's the result of both guys buying in, namely Tyler as far as a different role," Dodgers manager Dave Roberts said. "Tony came out and threw the baseball much better than the first inning, and then Tyler came in and gave us four strong innings."

Anderson came on in relief and yielded two hits while earning his first victory for the club that signed him four weeks ago.

"Me and T have developed a lot better relationship going after one another," said Gonsolin, who yielded three hits and three walks with 11 swing-and-misses. "Going into these games like, `Hey, let's get this whole game today.' It definitely makes me feel more comfortable that he's right behind me."

Craig Kimbrel pitched the ninth for his second save with his new team, the first at Dodger Stadium. He was pleased to get a save opportunity after warming up Thursday only to watch Los Angeles' powerhouse lineup score six runs in the eighth.

"We have a good offense, and they're going to explode a lot this year," Kimbrel said. "It was good to get in there today."

Kyle Farmer had an RBI single in the Reds' fourth consecutive loss. Cincinnati has scored 12 runs in the skid.

"Having gone through this a lot, you can't make too big a deal about it," Reds manager David Bell said. "It's going to happen, I know that. But it can feel hard when the hits aren't falling and you're facing good pitching."

Vladimir Gutierrez (0-2) yielded three runs on five hits and three walks while pitching into the fifth inning for Cincinnati.

"Guti had one of our best starts of the year," Bell said. "Maybe the best life he's had on his fastball since early last year. Their pitching just made it tough on us."

The Dodgers scored in the second when Taylor singled home Max Muncy, but Aristides Aquino made an excellent throw from left to get Justin Turner at the plate for the third out.

Lux then singled in the third and scored on a triple by Trea Turner, the 2021 major league batting champion. He hasn't cooled off to begin his first full season in LA, extending the hitting streak that began last Sept. 12.

Incredibly, Trea Turner has a hit in 53 of his 59 games with the Dodgers.

Anderson knocked off Joey Votto's helmet with an errant 2-2 changeup leading off the sixth. Votto took enough offense that players from both teams stepped out of their dugout before calm prevailed. Farmer singled home Aquino with Cincinnati's only run later in the inning.

Jackie Robinson Day is always important at Dodger Stadium because of the franchise's role in baseball's integration and because Robinson grew up in Pasadena, 10 miles away from the Dodgers' future home.

Robinson's son, David, spoke to the Dodgers at the base of Jackie Robinson's statue in the plaza behind the outfield bleachers before the game. Robinson's 99-year-old widow, Rachel, received several hearty ovations during a pregame ceremony.

Dodgers: Roberts thinks RHP Tommy Kahnle and LHP Caleb Ferguson should be ready to return to the majors in 3-4 weeks. They're both coming back from Tommy John surgery.

The second major league start for Cincinnati rookie Hunter Greene (1-0, 5.40 ERA) is in his hometown. The Los Angeles native and Notre Dame High School graduate faces the Dodgers' Julio Urias (0-1, 13.50), who had a rough season-opening start at Colorado.