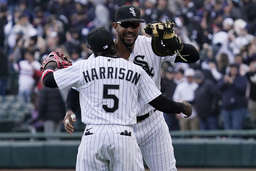 Michael Kopech threw five solid innings, and Yasmani Grandal singled away from the shift to put Chicago ahead in the sixth. Eloy Jimenez and Tim Anderson added two hits apiece for the White Sox, who have won six of seven and are off to a 6-2 start for the first time since 2016 despite several key injuries.

"We've got a good group of guys in here," Hendriks said.

Wander Franco doubled for the reigning AL East champion Rays, who have lost four straight after beginning the season 3-0.

"We're 4-5 for a reason," manager Kevin Cash said. "A lot of it is because we haven't been as crisp on defense, we've been running into outs. That is a little uncharacteristic for this club, but we're going to work hard to get it right."

Hendriks struck out Taylor Walls in the ninth for his fourth save after intentionally walking pinch-hitter Ji-Man Choi to load the bases. Hendriks also got the save in a 3-2 win Friday night.

Kopech allowed an unearned run and a hit, struck out five and walked two in his first career appearance against the Rays. The right-hander has moved to the rotation after making 40 bullpen appearances and four starts last year, his first full major league season.

Reynaldo Lopez (2-0) allowed a run in an inning.

Grandal's single off Ryan Thompson (1-1) gave the White Sox the lead for good in the sixth. Luis Robert scored after reaching on an error.

"Good piece of hitting," Cash said. "Obviously, I'm taking the gamble of shifting everybody over."

Manuel Margot singled off Lopez to tie it 2-2 in the top of the inning. Yandy Diaz was unable to score on an errant throw to third.

Abreu homered off Kluber for a 2-1 White Sox lead in the fourth. Anderson scored after a leadoff infield single - the first hit given up by Kluber - and advanced on Kluber's pickoff error.

"Made a mistake to Abreu, left a breaking ball up," Kluber said. "We've got a lot of history against each other, not really any secrets."

Harold Ramirez's sacrifice fly gave the Rays the lead in the first.

"He could have gotten distracted and turned it into a crooked-number inning," manager Tony La Russa said about Kopech. "I was really pleased, and he just got better and better."

Randy Arozarena was ejected for the first time in his career after he tossed his bat in response to a called strikeout in the sixth.

"It was a tight game at that point and I thought the umpire made a bad call, so I was upset about it so I threw the bat," he said through an interpreter.

The Rays acquired RHP Javy Guerra, who was designated for assignment by San Diego, for cash considerations. RHP Shane Baz (right elbow surgery) was moved to the 60-day injured list.

White Sox: Pollock (hamstring) is about 80% and will "soon" go to Triple-A Charlotte for at-bats, La Russa said. ... Moncada (right oblique strain) is improving but feels discomfort during certain moves, La Russa said. ... 3B Josh Harrison (sore back) returned to the lineup.

RHP Vince Velasquez (0-0, 2.25 ERA) is scheduled to start for the White Sox in Sunday's series finale. RHP Jonathon Feyereisen is slated to open for the Rays.