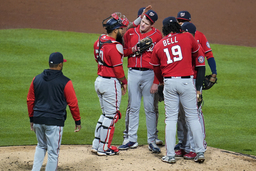 PITTSBURGH (AP) Michael Chavis capped a three-hit night with a leadoff triple in the eighth inning, and the Pittsburgh Pirates beat the Washington Nationals 6-4 on Saturday.

Diego Castillo drove in Chavis with a single, giving Pittsburgh a 4-2 lead. Chavis, who has reached safely in eight of 14 plate appearances this season, said he thought he had a double coming out of the box.

"The hitting staff, and everybody around here, has really helped me stay in shape in the field and in the batting cage, as well. I've been getting my work in and just waiting for my opportunity."

"We're going to need our full roster to do that," Pittsburgh manager Derek Shelton said. "We've talked on the pitching side, we're gonna need everybody to contribute in different ways. Bednar pitched in the seventh today. We didn't see him do that at all last year."

Juan Soto homered, doubled and walked twice, but Washington was 2 for 11 with runners in scoring position and stranded 11.

"We had some opportunities with guys on base," Nationals manager Dave Martinez said. "We hit the ball hard, though. We lined out a few times. We just couldn't get that big hit with guys on base."

Two more runs crossed for the Pirates in the eighth, when Cesar Hernandez tossed what could have completed an inning-ending double play past Josh Bell at first.

Chavis had one of three straight singles for Pittsburgh in the fifth, the first two chasing Nationals starter Josh Rogers (1-1). Ke'Bryan Hayes and Bryan Reynolds reached off Rogers, and Chavis took Steve Cishek to right for an RBI.

Wilson gave up two runs and four hits over 4 1/3 innings.

Soto took a changeup from Wilson 382 feet to right, knotting it 2-all in the fifth with his third homer. It bounced through a stairwell and into the Allegheny River, making Soto the 43rd different player to reach the water since PNC Park opened in 2001.

"I think, for me, the biggest thing is he doesn't chase," Wilson said of Soto. "So, when you pitch him, he's perfectly fine taking a walk. You have to pitch him in the zone because he's not going to swing out of the zone. I think, as talented as he is, that's the hardest part as a pitcher."

Bell dropped an RBI single into left off Chris Stratton in the ninth, cutting the deficit to three, before Soto scored on a force out for the 6-4 final.

"We kept it close," Martinez said. "We wanted to keep it at one run with the top of the order coming up. We thought we had a great chance like that. It didn't happen."

Pirates: OF Anthony Alford (right wrist sprain) began a rehab assignment with Low-A Bradenton on Saturday. . SS Kevin Newman is day-to-day with a groin injury that had him miss a second straight game.

Nationals LHP Patrick Corbin (0-2, 10.80 ERA) will cap the four-game series against the Pirates opposite LHP Jose Quintana (0-1, 1.69) on Sunday. Corbin gave up six runs in 2 2/3 innings his last time out, a 16-4 loss to the Atlanta Braves on Tuesday. Quintana took the loss in Pittsburgh's home opener on Tuesday but allowed just one run in 5 1/3 innings.