Mets' Lindor bailed out by Alonso, wins it in 10th vs Giants 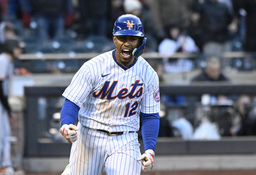 NEW YORK (AP) Pete Alonso had Francisco Lindor's back. Then he tried to take his shirt.

It's no stretch to say Alonso earned the souvenir.

Lindor lined a walk-off single in the 10th after a big reach by Alonso bailed him out in the top of the inning, and the New York Mets beat the San Francisco Giants 5-4 Tuesday to open a doubleheader.

Lindor, who also had a tying double in the fifth, ripped a clean single to center against Jarlin Garcia (1-1), scoring automatic runner Brandon Nimmo from third. He was mobbed by teammates in the infield, with Alonso trying to rip off his uniform.

Replays showed Alonso just barely held the base with his right foot - Alonso jumped for joy when a freeze frame appeared on the video board - and umpires overruled the safe call. The grab kept Adam Ottavino (1-0) in line for the win.

"Pete staying on the bag there, that's a really hard play," Mets manager Buck Showalter said. "We're lucky to have the best replay guy in the business in our guy (Harrison Friedland). So that was a good play."

Lindor lifted his average to .289 with nine RBIs in 11 games - a strong start for the $341 million man's second season in Queens.

"Linny seems to be dealing us what we need about every time," Showalter said.

Two of baseball's best teams early this season, the Mets (8-3) and Giants (7-3) were each set to play at least 18 innings in one day for the first time since 2019. Pandemic-era seven-inning doubleheaders are gone, but automatic runners in extra innings remain.

The Mets nearly ended it in the ninth, when Giants closer Camilo Doval walked Eduardo Escobar and Robinson Cano leading off. Pinch-hitter Luis Guillorme - clean-shaven after years with a long beard - sacrificed them to second and third, but Doval gathered himself and struck out Travis Jankowski and pinch-hitter Dominic Smith swinging to force extras.

Joc Pederson hit a solo homer and Brandon Crawford had two RBIs as the Giants pounced early against Mets starter Tylor Megill for a 4-1 lead. New York erased that in the fifth, when starter Alex Cobb left with an injury before Lindor's tying RBI double off reliever Dominic Leone.

Neither Cobb nor Megill quite lived up to the standards set by their rotations this season.

Cobb became the first Giants starter in 10 games to allow more than two earned runs, ending the second-longest such streak to begin a season in the majors since 1901. He gave up run No. 3 on Jeff McNeil's two-run double in the fifth, then promptly left with a right groin injury.

Cobb was placed on the 10-day injured list after Game 1, allowing the team to activate right-hander Yunior Marte. Manager Gabe Kapler said Cobb would get an MRI, but Cobb said he was hopeful for a quick return.

"That was a brutal game for us," Cobb said. "Having two nine-inning doubleheaders, and then the starter coming out as early as I did, is putting the team in a bad position."

Megill ended a streak by Mets starters of eight straight games allowing one or zero earned runs, which matched a franchise record. The big right-hander had thrown 17 1/3 consecutive scoreless innings dating to last season before Pederson's leadoff shot in the second.

He recovered and grinded through six innings, preserving a 4-4 tie with seven hits, two walks and four strikeouts.

Giants: IF/OF Jason Vosler was recalled from Triple-A Sacramento for the opener. IF/OF Luke Williams was optioned to Triple-A, but remained with the Giants as their 29th man for the doubleheader.