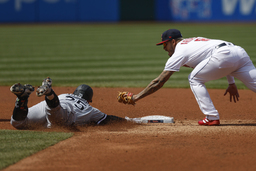 CLEVELAND (AP) Jose Ramirez hit his second grand slam of the season, connecting during a nine-run second inning as the Cleveland Guardians roughed up Dallas Keuchel and routed the sloppy Chicago White Sox 11-1 Wednesday in a doubleheader opener.

Cleveland won at home for the first time with its new name. The Guardians had lost their first three at Progressive Field this season.

"That was great," Cleveland pitcher Shane Bieber said. "The longer the inning our hitters have, the better. And the second was a long one."

The Guardians delivered eight straight hits off Keuchel (1-1), who allowed a career-high 10 runs and 10 hits, before the former Cy Young Award winner was pulled with no outs in the second.

"I watched it back on film, it didn't look any better," Keuchel said. "I was trying to do the best I could. You just kind of tip your hat and move on."

Chicago didn't help its left-hander too much, either, making four errors in the first two innings -- three by All-Star shortstop Tim Anderson -- that contributed to a pair of unearned runs.

"Just when you think you've seen it all, you really haven't," Keuchel said.

Ramirez, who signed a seven-year, $141 million contract last week, leads the majors with 19 RBIs. His grand slam was Cleveland's third in 10 games to start the season.

Bieber (1-0) won for the first time since June 8, 2021, allowing one run and four hits in six innings. The former Cy Young Award winner struck out seven without issuing a walk.

Josh Naylor and Oscar Mercado had two hits apiece and Myles Straw scored three runs for the Guardians. Second baseman Gabriel Arias made his major league debut, scoring and driving in a run.

The White Sox got on the board in the sixth when Anderson doubled home Adam Engel.

"The manager didn't get them ready to play," Chicago manager Tony La Russa said. "I take the heat for that."

Games between the White Sox and Cleveland on Monday and Tuesday were postponed by rain and cold, prompting a traditional doubleheader to be added to the schedule.

White Sox RHP Lucas Giolito, on the 10-day injured list with an abdominal strain, rejoined the team in Cleveland after pitching a simulated game Tuesday in Glendale, Arizona. Giolito, who tossed four scoreless innings and struck out six before being hurt April 8 at Detroit, said he expects to be activated and start Sunday at Minnesota.

White Sox: OF Eloy Jimenez (left ankle soreness) was held out of the lineup after working out before the game, but was available to pinch-hit. Jimenez has played with the injury since fouling a pitch off his ankle on April 13 against Seattle.

Guardians: 1B Owen Miller, RHP Cal Quantrill and RHP Anthony Castro were placed on the COVID-19 injured list. Miller leads the majors with a .500 batting average and a 1.509 OPS. Quantrill was scheduled to make his next start Friday.