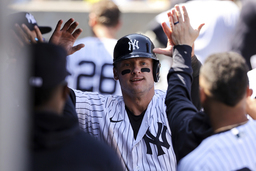 NEW YORK (AP) In the foggy afterglow of the Yankees' postgame celebration, Gerrit Cole felt like he could exhale.

"Breathing is a good thing," he said with a smile. "Everybody can breathe today, right?"

Cole bounced back from the shortest start of his career, Anthony Rizzo powered a long-awaited outburst from New York's lineup and the Yankees pounded the Cleveland Guardians 10-2 Sunday to complete a three-game sweep in a series marred by fan misbehavior.

Cole (1-0) struck out nine over 6 2/3 scoreless innings, and Rizzo's two-run drive in the first inning tied him for the AL lead with five homers. New York won for the fifth time in six games, improving to 10-6 despite early concerns about their ineffective ace and a surprisingly punchless lineup.

The Yankees cranked up a fog machine, blasted loud music and celebrated their first sweep of the season in the clubhouse before taking a day off Monday.

The Yankees said they increased security in the stands Sunday, and fans appeared to refrain from more beverage tossing.

The Bronx's famed Bleacher Creatures lobbed plenty of insults, though, especially at Straw in center and Mercado in right.

Straw, who called Yankee Universe the "worst fan base on the planet" after Saturday's incident, was greeted by chants of "Crybaby!" and sarcastically called "Peter Parker" for his Spiderman-like climb up the wall to confront at least one fan face to face.

Straw got the loudest boos during lineup introductions, and fans pointed and jeered when he and second baseman Andres Gimenez miscommunicated on Hicks' bases-loaded popup during New York's three-run third inning.

Mercado badly misjudged DJ LeMahieu's line drive in the second, letting it go over his head for an RBI double that also delighted fans.

LeMahieu had three hits and three RBIs, including a two-run homer in the sixth, and pinch-hitter Tim Locastro pulled a two-run drive in the eighth as New York's slumping offense had its biggest day of the year. It took the Yankees 16 games this season to score at least seven runs in a game, a first for the franchise since 1990.

"We played like ourselves today," LeMahieu said. "That's kind of what we expect. It's not always going to happen like that, but we were due for a breakout game."

Cole covered just 1 2/3 innings in his previous start against Detroit, tying his career high with five walks. He came into the day with a 6.35 ERA through three starts.

Working with backup catcher Jose Trevino for the first time, Cole limited the Guardians to a walk and four hits. He left to a standing ovation after 92 pitches.

"I haven't been kidding when I said I think it's about to pop," Yankees manager Aaron Boone said.

"On a day when he needed a little help, we didn't help out," manager Terry Francona said.

Left-hander Kirk McCarty made his major league debut for the Guardians and allowed four runs on two homers over the final three innings.

Gimenez had two hits, including a two-run triple in the ninth.

Kwan felt cramping in his hamstring after flying out in the top of the third. He was replaced by Ernie Clement in left field for the bottom of the inning.

The 24-year-old Kwan cleared concussion testing Saturday after crashing into the outfield wall. He was taunted after the play, prompting Straw's confrontation. Francona said Sunday morning that Kwan was sore but OK to play.

Francona said Kwan's removal Sunday "kind of was preventative" and that the rookie was day to day.

Guardians: INF Owen Miller was activated from the COVID-19 injured list. ... INF Yu Chang is eligible to return from the COVID-19 IL but needs time to ramp up before he's game ready. ... LHP Konnor Pilkington was optioned to Triple-A.