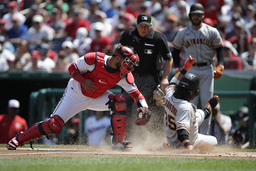 Pederson moved to the leadoff spot after Mike Yastrzemski was placed on the COVID-19 list Sunday morning. He hit a home run to leadoff the game, a 441-foot blast that's the longest leadoff HR by a Giants batter tracked by Statcast.

Pederson did it again leading off the seventh inning to go 3 for 3.

"I was feeling good, seeing the ball out of their hand and just swinging at some pitches that I was able to put on the barrel," said Pederson, who is hitting .364 with five home runs and 10 runs scored in his first season with the Giants.

The Giants are 7-3 on this road trip, with a game left to go in Milwaukee on Monday. Wilmer Flores added three RBI singles for San Francisco, who swept a series of at least three games at Nationals Park for the first time June 6-9, 2008.

Starter Logan Webb (2-1) struggled early, but ended up allowing three runs on seven hits and striking out six over 6 2/3 innings. He retired eight of the last nine batters he faced.

"I just feel like I'm finding myself a little bit now. I don't feel like I've got, honestly, my best stuff," Webb said. "It's weird, like I feel good but it's just not there right now. We'll look into some mechanical things"

In his previous start, Webb gave up three runs on six hits and three walks in 3 2/3 innings in a loss to the Mets.

Washington was swept for the first time this season and has lost five straight. Yadiel Hernandez homered, singled and drove in all of the Nationals' three runs. Starter Joan Adon (1-3) pitched four-plus innings and was charged with five runs on six hits.

After Pederson's homer, Flores later singled in another run to make it 2-0 in the first. Pederson hit a sacrifice fly in the second, and the Giants increased their lead to 4-1.

"I think he set the tone for the day," manager Gabe Kapler said of Pederson, "I think he's picking really good pitches to go after and even when he gets deeper into counts and pitchers have velocity, he's able to catch up to that velocity."

Hernandez pulled Washington within 4-3 with a two-run homer in the third, but Flores drove home Pederson in the fifth and Pederson made it 6-3 in the seventh before the Giants tacked on six runs in the ninth.

Washington's bullpen, which had posted an 0.94 ERA over the past six games, gave up seven earned runs.

"Falling behind, not throwing strikes, walks," manager Dave Martinez said. "Hopefully that's out of them today and they come right back Tuesday doing what they've been doing in previous games."

Pederson hit the 24th leadoff home run of his career. It was his 18th career multi-homer game and first this season.

Giants: Kapler said Yastrzemski is vaccinated and boosted. ... OF LaMonte Wade Jr. (left knee inflammation) was 0 for 2 with a walk and run scored in a rehab game with Triple-A Sacramento on Saturday.

Nationals: 3B Lucius Fox vomited on the field and left the game in the top of the first inning. Martinez said after the game Fox had "a bit of a stomach flu." . OF Victor Robles (tight groin) was out of the lineup. ... 1B Josh Bell, who left Saturday's game with right hamstring tightness, was not in the lineup. Martinez said an MRI was "pretty clean" and Bell was likely available to pinch hit.

Giants: LHP Sam Long (0-0, 0.00 ERA) will start San Francisco when they complete their road trip with a stop in Milwaukee. Long pitched two scoreless innings in his first start of the season, Friday against the Nationals.

Nationals: Josiah Gray (2-1, 3.14 ERA) will start for Washington in the first game of a three-game series against the visiting Marlins on Tuesday. Gray is 1-0 with a 3.00 ERA in two starts against Miami.