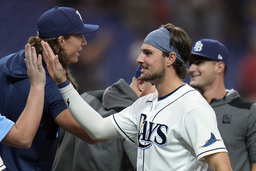 It was the first career homer for Lowe, who was facing some pressure after going homerless and batting .170 in 16 games as Tampa Bay's replacement for power-hitting Austin Meadows. Manager Kevin Cash asked Lowe before the game "not to make me look stupid hitting him fourth."

"He said it in the dugout, some assurance there from skip," Lowe said, grinning. "It was fun. I took it as a challenge."

Zunino, too, was feeling some heat after hitting 33 homers last season and batting .083 so far this season. But he wasn't worried about Lowe.

"I've been there. I've pressed. It's natural to do even with many years under your belt, but there's no question of the talent, no question of the resume with what he's done in Triple-A," Zunino said. "It's just finding your footing and building a little confidence. When a guy like him gets going, he's going to go on a tear and this will be an afterthought sooner rather than later."

Lowe's homer came in a four-run first inning off Twins starter Dylan Bundy. Zunino's solo shot put the Rays up 6-0 in the third.

"The game wasn't over just because we were four runs or five, six runs behind," Twins manager Rocco Baldelli said. "It just gave us a little bit of a challenge. It's going to be uphill sledding at that point, but we couldn't get anything going offensively."

Kluber (1-1) gave up one run on one hit and no walks in six innings, striking out six in his fourth start for the Rays.

The Rays jumped on Bundy (3-1) from the first pitch, which Brandon Lowe hit for a double. Wander Franco followed with an RBI double and after a single by Yandy Diaz. Lowe's three-run homer made it 4-0.

"Any time you can get run support early - let alone four in the first four hitters - it's a huge lift, not just to the pitcher but to the entire team," Kluber said. "You can go out there and be aggressive in the strike zone and attack the opposition."

Bundy, who had given up one run in three previous starts, gave up six runs on seven hits in six innings, striking out seven.

"He came in as one of the hottest starters in baseball," Cash said. "(I'm) really impressed with the way our offense went about it in the first three innings."

It was the fifth win in six games for the Rays, who have given up two earned runs or fewer in all six of those games.

Carlos Correa drove in the Twins' run with a single, the only hit off Kluber. It came after Kluber hit Byron Buxton with a pitch leading off the fourth.

Twins: IF Miguel Sano missed a third straight game with a sore knee, but is close to 100%, according manager Rocco Baldelli. ... RHP Bailey Ober (groin) is probably headed to the injured list.

Rays: 1B Ji-Man Choi (hyperextended left elbow) missed a third straight game. ... LHP Ryan Yarbrough (groin) is likely to be inserted into the rotation early next week after throwing 59 pitches in his second rehab start for Triple-A Durham on Thursday night.