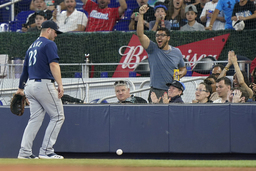 J.P. Crawford also homered while Jesse Winker had three hits and two RBIs for the Mariners, who snapped a four-game skid.

Making his first start against an NL club, Gilbert (4-0) held the Marlins hitless until Jon Berti's two-out single in the fifth. The 24-year-old righty was lifted after allowing Brian Anderson's solo homer with two outs in the sixth.

"I just wanted to finish strong, he had a good swing," Gilbert said of Anderson's shot. "That stuff happens, but yeah, I wasn't too happy with it."

Gilbert allowed three hits, walked four and struck out five. He exited with a 0.64 ERA through five starts. The blast by Anderson was the first earned run Gilbert allowed since season debut against Minnesota April 9.

"They had some good at-bats, long at-bats," Gilbert said. "Made me work out there. I just tried to stay in the zone, stay aggressive and keep at it."

Rodriguez's three-run drive against Sandy Alcantara (2-1) landed on the left-center field walkway and made it 5-0 in the sixth. Crawford hit a two-out double and the Marlins intentionally walked Abraham Toro to face Rodriguez, who began the day with a .205 average.

"Words can't describe how I feel," Rodriguez said. "It was a beautiful moment and at the moment it happened. Very exciting. This home run means much more to me because it helped us rebound from the losses and against a good club and starter like Sandy Alcantara."

Rodriguez had never encountered the situation of having an opponent intentionally walk the preceding batter to face him.

"That was the first and that's what they got," Rodriguez said. "If they wanted the challenge with me, I'm going to give you the challenge. I said, `if you want it, let's go.'/"

"Toro had already got a hit to drive in a run earlier off a changeup," Mattingly said. "The number wasn't really that close for us, but I also know this kid is a talented young kid that's going to be really good. You hate to get him excited and all, but I mean it's just such a better matchup for Sandy from that standpoint."

Winker's two-run single in the ninth made it 7-2. Miami's Jorge Soler hit his third homer in the bottom half.

The Mariners finished the Florida leg of their nine-game road trip 2-4 with Gilbert winning both outings against Tampa Bay and Miami.

"Nice win today against a quality opponent," Seattle manager Scott Servais said. "The guys over there can really pitch. We got our hands full here in Florida and I think it's time for us to get out of Florida."

Crawford's solo shot in the second gave Seattle a 1-0 lead. Crawford, who extended his hitting streak to 10 games, drove Alcantara's fastball into the Mariners' bullpen in right-center for his fourth homer.

Seattle stretched its advantage on Toro's run-scoring single in the fourth.

Alcantara allowed five runs, six hits, struck out six and walked four in 5 2/3 innings. It was Alcantara's shortest outing since his opening day start of five innings against San Francisco.

BARK IN THE PARK

Sunday's attendance of 16,741 included spectators with 232 pet dogs. The arfs and barks were noticeable from the upper deck section throughout the game. The Marlins plan another three pet-welcome promotions this season.

ALMOST FELL TO THE MARLINS

Seattle selected Gilbert with the 14th pick of the 2018 amateur draft, one ahead of Miami's spot. The Marlins drafted outfielder Conor Scott, who was dealt to Pittsburgh in the offseason for catcher Jacob Stallings.

Mariners: RHP Sergio Romo (right shoulder inflammation) has thrown a bullpen session and might increase his workload to a minor league appearance soon.

Marlins: IF Jazz Chisholm Jr. (stomach discomfort) was a late scratch but pinch hit and singled in the eighth.

Mariners: LHP Marco Gonzales (1-2, 3.86) avoided a serious injury after getting hit on the wrist off a line drive in his previous outing and will start the opener of a series against Houston on Monday night.

Marlins: RHP Pablo Lopez (2-0, 0.39) will attempt to continue his excellent April in the opener of a three-game home series against Arizona on Monday night. Lopez has pitched 18 scoreless innings going into the game.