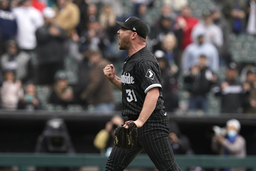 CHICAGO (AP) Dylan Cease struck out 11 to match a career best and gave up just one hit in seven sparkling innings, propelling the Chicago White Sox to a 3-0 win over the Lost Angeles Angels on Monday.

Three-time AL MVP Mike Trout struck out in all four at-bats, three against Cease. The Angels star, who homered and doubled in a win Sunday to raise his OPS to a whopping 1.247, fanned against Liam Hendriks to end the game.

Cease called it "by far" the best start of his career.

"(Trout) is pretty much one of the greatest players there's ever been," Cease said. "You try not to think about that too much. You've kind of got to go in knowing what you've got to do. I kind of had a plan and stuck to it."

Angels two-way star Shohei Ohtani didn't start, a day after making an early exit because of groin tightness. The reigning AL MVP grounded out as a pinch-hitter in the eighth.

The White Sox won for the third time in 12 games. Los Angeles has won seven of nine.

Cease (3-1) threw 64 of 93 pitches for strikes and walked none. Taylor Ward got the only hit against him, a leadoff double in the fourth.

"Still a long way to go, we've got a lot of season, but (Cease) takes the mound knowing that we've got a chance to break even (in the series)," White Sox manager Tony La Russa said. "He's embracing the pressure, which is really a great sign of what he can do for this organization, this year and in the future."

Cease's most recent 11-strikeout performance came on Aug. 29, 2021, against the Chicago Cubs.

Kendall Graveman pitched the eighth and Hendriks recorded his fifth save in the combined two-hitter.

Trout fanned four times in a game for the seventh time in his 12-season career.

"We actually pitched really well today," Angels manager Joe Maddon said. "They just pitched better. Cease was outstanding, and that was as good as I've seen Hendriks in a while. He's good, but that fastball. . They were both virtually unhittable today."

Tim Anderson and Luis Robert got the White Sox started in the first with hits off Patrick Sandoval (1-1) and an error by left fielder Jo Adell moved them into scoring position. AJ Pollock hit an RBI grounder and Jake Burger followed with a sacrifice fly.

"That's what a leadoff guy is, to hopefully set the table and start something that can continue to grow throughout the whole game," Anderson said. "Being able to bring some energy, being able to get things rolling in a positive way, I'm glad I've been able to do that."

Robert strung multi-hit games together for the first time since the opening series in Detroit on April 8 and 9. He singled three times on Monday and twice on Sunday.

"When you've got Robert healthy and swinging well, you look at it, the Angels are every bit of what their record says they are," La Russa said. "We lost the first and third, we come back to win the second and fourth (games). That tells me we're going to be dangerous to play against from here to the end."

Adam Engel hit an RBI double in the sixth to score Jose Abreu from first. Abreu flashed a delighted grin on his way back to the dugout after sliding home.

"He was chugging, man," La Russa said. "It was like he was running downhill. . he had the biggest smile on his face when he came into the dugout. It was worth the price of admission just to see that."

Angels trainer Mike Frostad said Ohtani was "doing better this morning" and there were currently no plans for an MRI or to put him on the injured list. Maddon said Ohtani could pich at Boston later in the week. "I hope so," Maddon said. "We're just going to wait a day or two to figure that out."

Each team optioned a pair of players to their Triple-A affiliates to get in compliance with the 26-man roster, which decreased from 28 on Monday after MLB added two temporary slots to make up for shortened spring training. Chicago sent INF Danny Mendick and LHP Anderson Severino to Charlotte. Mendick hit .250 with one homer and three RBIs in 10 games. Severino has a 6.14 ERA with nine strikeouts in six relief appearances. Los Angeles optioned RHP Elvis Peguero and RHP Andrew Wantz to Triple-A Salt Lake. Peguero had yet to appear for the Angels and is 2-0 with a 1.74 ERA in six minor league games. Wantz has a 6.00 ERA in three relief appearances.

Angels: INF David Fletcher was rested Monday as he works back to full strength from a hip strain he suffered on April 11. Frostad said the issue could affect Fletcher throughout the season. "There's going to be days where he needs some time off," Frostad said. LHP Jose Quijada is "doing well" and has begun throwing again in Anaheim, according to Frostad. . Maddon opted to rest 3B Anthony Rendon, but said he was feeling good. "To push him right now doesn't seem like the right thing to do," Maddon said. . Frostad said RHP Griffin Canning (back) has more bullpen sessions this week as he rehabilitates from a reaggravated back issue that prompted Los Angeles to put him on the 60-day IL on March 16.

White Sox: OF Andrew Vaughn (hand/wrist) was unavailable on Monday, marking his third missed game since leaving Friday's matchup after being hit by a pitch. Vaughn leads Chicago with 12 RBIs, ranks second in batting average (.283) and is third in hits (15). La Russa said Vaughn is day-to-day and is expected to return this week. . OF Eloy Jimenez (hamstring) was throwing in the outfield during warmups. Jimenez had surgery on Tuesday to repair a tendon behind his right knee, which has kept him out since April 23. The White Sox noted that C Yasmani Grandal and RHP Lance Lynn underwent the same procedure to fix similar injuries. Jimenez is expected to return within six to eight weeks.

Angels: RHP Noah Syndergaard (2-0, 2.12 ERA) gets the call to open a three-game series at the Boston Red Sox on Tuesday..

White Sox: RHP Michael Kopech (0-0, 1.42 ERA) will start Tuesday in the first of a pair of crosstown games against the Cubs.