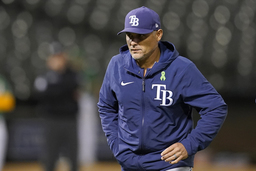 A solid win to start a nine-game trip sure provided a glimpse of how things can go when everyone in the lineup gets involved.

Yandy Diaz led off the game with a home run to back right-hander Drew Rassmussen's second straight winning start, and the Rays used a balanced offense to beat the Oakland Athletics 6-1 on Monday night.

"We've got an offense that we expect a lot of big things from this year," Cash said. "Even though with key guys out we've still got some key guys in there and would expect that it's going to be a very deep, thick lineup that can wear pitching down, and I felt like we kind of did that tonight."

Wander Franco returned to the lineup and hit a pair of run-scoring singles after a precautionary day off Sunday to nurse his tender right leg.

Franco and Randy Arozarena hit consecutive RBI singles in the third against Daulton Jefferies (1-4), and Mike Zunino's base hit the next inning brought in another Rays run.

Manuel Margot added an RBI double in the fifth among his three hits as the Rays tagged Jefferies for career highs of 11 hits and six runs.

"It's a good-hitting ballclub. Rasmussen pitched really well tonight, too, so when you have that balance it works out," Jefferies said. "... It's just execution and the balance between attacking and executing."

Cash has been eager to see more hitters get going at the plate and Tampa Bay capitalized with contributions from up and down the order to kick off a nine-game trip. The Rays improved to 3-5 in series openers this season with their first such victory on the road in three tries.

Rasmussen (2-1) allowed one run and one hit, struck out three and walked one in five sharp innings to follow up a victory against Seattle his last time out featuring career-bests of nine strikeouts and six innings. Four relievers finished the 2-hour, 37-minute game.

The clubs played their fifth of seven games over a 24-day span.

Oakland lost its season-high fourth straight after a weekend sweep by Cleveland at home, and has lost seven of nine after winning eight of 12.

First-year manager Mark Kotsay's message will be keep coming to work with a winning mindset to get through this rough stretch.

"Offensively we're in a bit of a funk. I think overall as a group a lot of guys are probably pressing," he said. "You look at the quality of at-bats and you still feel like they're still competing, it's just we're not getting the results right now."

Tampa Bay's pitchers held Oakland in check after having given up 17 runs over their previous 13 innings.

"No doubt, want to get back to playing our style of baseball," Cash said. "We're not used to having lopsided games against us, and today was a good start to pitch well, play some good defense behind our pitchers and get some timely hits."

The A's season-low crowd of 2,488 was their smallest excluding COVID years since they drew 2,443 in a 6-3 win against the Rangers on Sept. 9, 1980. Rickey Henderson stole a base and Mitchell Page homered twice in that game.

Rays: RHP Phoenix Sanders dealt with some back tightness. ... C Francisco Mejia, sidelined on the COVID-19 injured list, played as designated hitter Monday in a rehab game at the club's spring training facility in Port Charlotte, Florida, and is scheduled to catch five or six innings Tuesday before the team determines if he's ready to return. ... SS Franco returned to the lineup a day after he was scratched with right hamstring tightness. He is expected to play Tuesday though Cash subbed in a pinch-hitter for what would have been his last at-bat strictly as a precaution. Cash said he and Franco will have to manage the injury together with "constant communication." ... Tampa Bay optioned OF Josh Lowe to Triple-A Durham and designated RHP Robert Dugger for assignment a day after he made his major league debut with 5 1/3 relief innings during Sunday's 9-3 home loss to the Twins.

Athletics: RHP reliever Lou Trivino, on the COVID-19 IL since April 18, made a rehab start with Class-A Stockton on Sunday and could be back with the A's as soon as Tuesday. ... Veteran C Stephen Vogt's sprained right knee is making good progress.

RHP Paul Blackburn (3-0, 1.35 ERA) is set to start the middle game of the series for Oakland, having gone 3-0 over his last four starts. ... Rays LHP Ryan Yarbrough is expected to come off the injured list from dealing with left groin tightness and either start or follow an opener to pitch the bulk of the innings.