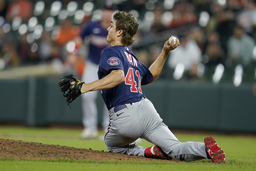 The Twins have won 12 of 13 to move six games over .500 (15-9) and into first place in the AL Central, which does not have another team with a winning record. Minnesota has outscored the opposition 63-25 during its 13-game run, including 25-7 during its current four-game win streak.

Good hitting and solid pitching has played a part. So has the team's confidence and poise.

"You can definitely see it, and you see it everywhere you look," manager Rocco Baldelli said. "You expect someone to come through and get the job done."

Jeffers was that person on this night, immediately after the Orioles tied the game at 2 in the bottom of the fifth.

Gary Sanchez hit a one-out double off Joey Krehbiel (1-3), Trevor Larnich walked and Jeffers followed with a drive over the center-field wall. He has three home runs this season, all in his last seven games.

"Drove in some runs all in one swing," Baldelli said, "which is always nice to see with Ryan."

Minnesota pulled away with a two-run ninth that featured an RBI double by Byron Buxton.

"I didn't have my best stuff, not my sharpest stuff," Ryan acknowledged.

The right-hander was followed by Caleb Thielbar (1-0), the first of three Minnesota relievers.

Trey Mancini had two hits and an RBI for the last-place Orioles, who have dropped seven of nine. Bruce Zimmermann worked five innings for Baltimore, allowing two runs and four hits.

"Definitely didn't have the command that I've had so far this year throughout the start," Zimmermann said. "Thought I was pretty crisp through the first three and then it kind of got away from me a little bit in the fourth and the fifth."

Minnesota went up 1-0 in the fourth inning when Zimmermann issued a two-out walk and Jose Miranda followed with a double to center, his first major league hit and RBI.

Miranda, a cousin of "Hamilton" creator Lin-Manuel Miranda, is a 23-year-old infielder and the team's minor league player of the year in 2021. He was 0 for 4 in his debut Monday.

Ryan entered the bottom half with a chance to extend his run of consecutive scoreless innings to 21, a Twins record for a rookie starter. But Austin Hays led off with an infield hit, took third on a double by Rougned Odor and scored when shortstop Carlos Correa mishandled a grounder.

Jorge Polanco hit an RBI single in top of the fifth, and Trey Mancini did the same in the Orioles' half.

But Baltimore managed only seven hits and went 1 for 8 with runners in scoring position.

Correa made a fine over-the-shoulder catch and had a pair of hits. He's 13 for 27 in his last six games and leads the club with seven multihit games.

Attendance was announced at 6,678 after Monday night's series opener drew a meager crowd of 7,427. This, despite the promotion offering tickets at 1992 prices to mark the 30-year anniversary of the opening of Camden Yards.

Twins: INF Miguel Sano will undergo surgery to repair a meniscus tear in his left knee. The procedure will take place later this week, and Baldelli says there is no timetable for his return. The injury while Sano was celebrating with teammates after a win over Detroit. ... RHP Sonny Gray (hamstring) will make at least one more rehab start before the team decides if he's ready to return. He went on the IL on April 17. ... RF Max Kepler left the game with an illness.