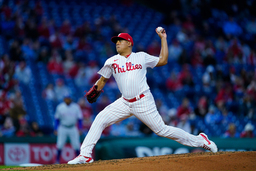 PHILADELPHIA (AP) John King got the Texas Rangers into a jam in the seventh inning when he put Philadelphia Phillies on second and third with no outs and the meat of the order coming up. The lefty reliever simply buckled down: Pop up, punch out, punch out.

"It was cool to watch," Rangers manager Chris Woodward said.

Mitch Garver and Jonah Heim homered, Zach Reks snapped a tie game with a two-RBI double and King got two big strikeouts, leading the the Rangers past the Phillies 6-4 on Tuesday night.

Garver and Heim went deep off Phillies starter Ranger Suarez (2-1) and the game was tied at 3 into the sixth inning. Heim singled and Nathaniel Lowe reached on third basemen Alec Bohm's error. Reks broke the tie with a pinch-hit, two-RBI double off reliever Seranthony Dominguez, and Marcus Semien's RBI single made it 6-3.

Bohm bobbled the ball before the throw and was slow to get the ball out of his glove on Semien's infield hit. Bohm had entered 40 for 40 in total chances in the field since a three-error game April 11.

Bohm batted with two runners on base in the seventh and struck out against King. The lefty reliever then struck out Bryce Harper looking to end the threat and help the Rangers win their third straight game.

"I just think internally that the guys have kind of come together and really embrace the challenge," Woodward said. "Everybody in that room has belief. Guys are starting to find their roles and you can see the bullpen really starting to throw the ball well. Guys are starting to get comfortable out there and embracing the expectations."

Brock Burke (3-0) tossed 2 1/3 scoreless innings of relief for the win. Joe Barlow worked a scoreless ninth for his second save.

J.T. Realmuto hit a solo homer in the eighth that made it 6-4 as the Phillies, no-hit on Friday by five Mets pitchers, opened a six-game homestand that includes four more with New York.

"We just didn't get any hits with runners in scoring position," manager Joe Girardi said. "We had some opportunities. We weren't able to take advantage of them."

The Phillies scored three off starter Jon Gray in the first. Rhys Hoskins hit a low liner that bounced past diving left fielder Nick Solak for a two-RBI double. Hoskins scored on Didi Gregorius' RBI single for a 3-0 lead.

Gray pitched three innings, allowed three runs and struck out three in his first start since April 19. He was placed on the 10-day injured list the next day with a left knee sprain. He was just 0-1 with a 7.00 ERA in two starts this season. Gray signed a $56 million, four-year deal with the Rangers in the offseason.

"It definitely feels weird pitching every 12, 15 days," Gray said. "Things are rolling again. It's exactly where I want it to be. Just to kind of have something I can build off of from here on out."

Suarez allowed five runs, three earned, in five-plus innings. Garver hit a two-run shot to left in the first and Heim tied it at 3 on a solo shot in the fourth.

The Phillies sent out three different starting lineups because of late scratches. Nick Castellanos was listed as the starting right fielder until he was scratched because his wife is expecting a baby. Odubel Herrera then got bumped from center field because of allergies.

Phillies: Harper will have his strained right elbow examined this week. He has not played right field since April 16 and remains in the lineup as the designated hitter.

Suarez is the only player in MLB history with the first name Ranger, making it, of course, the first time a Ranger faced the Rangers.

Rangers OF Willie Calhoun, once considered one of baseball's top prospects, told MLB.com he requested a trade after he was optioned to Triple-A Round Rock. The 27-year-old Calhoun was acquired from the Dodgers as part of the Yu Darvish trade in 2017. He was batting just .136 in 44 at-bats this season. Calhoun told the site: "I just respectfully asked them like, `If I'm not part of the future here with this team, is there any way that we can work out a trade or anything?'"