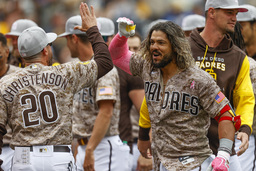 SAN DIEGO (AP) It was a happy Mother's Day indeed for Consuelo Buelvas, who called her son's game-winning shot from 3,110 miles away in Sincelejo, Colombia.

If Alfaro looked confident in going deep to center field on the first pitch he saw from Cole Sulser (0-1), it's because he was buoyed by a phone call he had with his mother before the game. The homer sent Petco Park into a frenzy and earned a curtain call for Alfaro, who was purchased from the Marlins for cash in December.

He seemed in disbelief afterward.

When Alfaro came up to the plate, he said he felt "confidence, you know, like trust. Just look for a pitch and put the ball in play. Make hard contact.

"I felt that and when I saw that ball it was like, `That should go.' I can't explain the feeling right now. It's just unbelievable. She called it earlier, right before the game started. It's a lot of emotions."

Alfaro, who had sent his mother flowers, said she no doubt was watching on TV. He remembered their conversation as he was rounding the bases.

"It feels like a dream, how she knows that," he said.

Until the ninth, it appeared that the Padres were going to be shut out for a second straight game. But Trent Grisham and CJ Abrams got on base ahead of Alfaro, who knew it was gone off the bat.

Alfaro turned toward the Padres' dugout, tossed his bat aside and twice brushed his right hand across the "Padres" on the front of his jersey before starting his trot. It was his second homer and first career walk-off shot.

Jurickson Profar was the first teammate to greet Alfaro before he was mobbed at home. Profar made the second out in the ninth when he was tagged trying to take third on Grisham's grounder against the shift and an error on third baseman Joey Wendle. Third base was open and Profar raced for the bag, but Sulser chased him down and tagged him out.

"I was mentally prepared already to say, `Yeah I (messed) it up.' But my friend right here saved me," Profar said, pointing to Alfaro. "That's why we have a great team. We believe in each other. We know what everybody's capable of doing. That's what makes it fun."

Jazz Chisholm homered for the Marlins, who have lost seven of eight games.

Manny Machado extended his on-base streak to 18 games, but neither he nor Eric Hosmer - two of the best hitters in baseball this season - could deliver a big blow for the Padres.

Rogers got Hosmer to pop up with two runners on to end both the third and fifth innings. After Kim Ha-seong hit a fly ball to the warning track in the left-field corner for the second out in the fifth with a runner on, Machado drove a ball down the line that curved foul then singled before Hosmer popped up.

San Diego's Joe Musgrove threw a season-high 108 pitches in seven strong innings. He held the Marlins to two runs and five hits while striking out eight and walking one. Robert Suarez (2-1) got the win for the Padres, working two innings with a strikeout and no hits.

Marlins: RHP Elieser Hernandez (2-1, 6.66) is scheduled to start Monday night in the opener of a three-game series at Arizona, which will counter with RHP Humberto Castellanos (2-1, 4.12).

Padres: Rookie LHP MacKenzie Gore (2-0, 1.71) is scheduled to start Monday night in the opener of a three-game home series against RHP Kyle Hendricks (1-3, 5.64) and the Chicago Cubs.