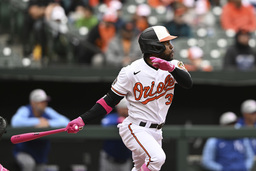 BALTIMORE (AP) Michael Taylor hit a tiebreaking single in the ninth inning after a pair of two-out Baltimore errors, giving the Kansas City Royals a 6-4 win over the Orioles in the first game of a doubleheader on Sunday.

With the score 4-all, Jorge Lopez (3-2) retired the first two batters in the ninth. Nicky Lopez then reached when second baseman Rougned Odor misplayed a sharp grounder and took third on a wild pickoff throw by the Orioles reliever.

Taylor's single put the Royals ahead and Salvador Perez provided an insurance run with another RBI single off Cionel Perez.

Kansas City manager Mike Matheny recorded his 700th career win in the majors with the Royals and St. Louis.

Jordan Lyles allowed three earned runs and seven hits with five strikeouts and one walk over 71/3 innings for the Orioles. It was Lyle's deepest start since May 15, 2018, and he is the first Orioles pitcher to throw seven innings this season.

With the Orioles trailing 3-2, Austin Hays drew a walk and Ryan Mouncatle singled off reliever Collin Snider in the seventh. Odor followed with a go-ahead, two-run double.

The Royals tied it in the eighth on a sacrifice fly by Ryan O'Hearn off Lopez.

Taylor Clarke (1-0) picked up the win with a scoreless eighth, and Scott Barlow earned his second save after standing two runners.

Hays went 4 for 4 and leads the Orioles with nine multi-hit games.

Baltimore was 3 of 12 with runners in scoring position and left 11 men on base.

Royals starter Zack Greinke allowed two runs on a season-high 10 hits with three strikeouts and no walks over 5/2/3 innings.

A female fan got a nice Mother's Day present when she was able to make a one-handed snag on the ground-rule double by Baltimore's Cedric Mullins. She received a round of high-fives, including one from her daughter.

The first two games of the series were rained out. The teams will play the finale on Monday, which had been a mutual day off.

Royals: RF Edward Olivares had to leave the game in the third with an undisclosed injury.

Orioles: OF Tyler Nevin (right groin) had a pregame workout and should be available for the second game of the doubleheader. "We want to see how it responds," manager Brandon Hyde said.

Royals: LHP Daniel Lynch (2-1, 3.86 ERA) will make his fifth start of the season and 20th of his career in the second game of the doubleheader. It's his first career start against the Orioles.

Orioles: LHP Bruce Zimmermann (1-1, 2.59 ERA) allowed two runs on four hits over fiving innings in his last outing on May 3 against the Twins.