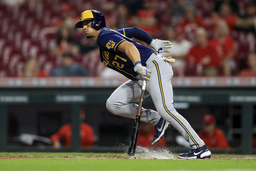 Hader worked around a leadoff walk in a hitless ninth and became only the third pitcher with saves in his first 12 appearances of a season after Lee Smith in 1994 and Jose Mesa in 2005.

"It's certainly made my job easier," Milwaukee manager Craig Counsell said. "We never take him for granted."

Hader struck out Brandon Drury and Tommy Pham for the final two outs and reached 500 strikeouts. Hader accomplished the feat in 293 2/3 innings, the second-fastest behind Aroldis Chapman 292 innings.

"It's good," Hader said. "It's exciting. I don't have the words to describe it."

Jace Peterson broke a 1-1 tie in the sixth with the first of his two doubles for the NL Central-leading Brewers, who ended a three-game losing streak. With the potential tying run on third base with two outs in the eighth, Urias dived to his left at shortstop to snare Kyle Farmer's liner just above the ground.

"Everything happened so fast," said Urias, who made his first start of the season at shortstop after five at third base and one at second. "I was just trying to stay focused. When I caught it, I didn't think I was going to catch it."

"That was an enormous play - a great play," Counsell said. "I was just hoping he could keep it in the infield, but he caught it."

Wandy Peralta (2-1) allowed one run and four hits in 5 2/3 innings with a season-high eight strikeouts and one walk.

"He was throwing his breaking balls for strikes," Counsell said. "He had some juice on his fastball, but the breaking ball was the key."

Cincinnati, a major league-worst 6-24, was trying to come from behind to win for its third straight game after not having accomplished the feat in its first 27 games.

Hunter Greene (1-5) lost his fifth straight start since winning his major league debut at Atlanta on April 10. He allowed two runs, four hits and four walks in 5 1/3 innings, six days after giving up a team-record-tying five home runs in a 10-5 loss at Milwaukee.

"It was a huge step, finding my rhythm as I went on," Greene said. "You hope to find it on your first pitch, but sometimes, it doesn't work out that way. I need to constantly mix. Obviously, I had to make adjustments from my last outing."

Cincinnati is the first team since 1893 in which no starter has gotten through six innings in its first 30 games.

Tyler Stephenson's RBI double put the Reds in the second, and Urias homered in the fourth After Peterson's go-ahead double, Kolten Wong added a sacrifice fly.

Victor Caratini and Willy Adames had RBI singles in the eighth off Hunter Strickland, boosting the lead to 5-1.

Devin Williams walked three in the bottom half, including Colin Moran with the bases loaded, and Tyler Naquin hit a two-run double.

Willy Adames has started all 31 of Milwaukee's games this season, but he was the Brewers' designated hitter on Tuesday after starting the previous 30 games at shortstop.

A fan sitting in the first row of left field seats made a nice barehanded catch of Urias's home run.

Brewers: RHP J.C Mejia was recalled from Triple-A Nashville to bolster an overworked bullpen. "We needed a fresh arm," manager Craig Counsell said. "We've got a number of guys down." . RHP Jake Cousins (right elbow) stay on what Counsell described as a "conservative rehab round of treatment" at Milwaukee's extended spring training camp. "It'll be 3-4 weeks before he sees an affiliate."

Reds: INF Mike Moustakas was activated from the COVID-19 injured list, one day after he was placed on it. . LHP Mike Minor (left shoulder) was sent to Triple-A Louisville on a rehab assignment.

Milwaukee RHP Adrian Houser (3-2, 3.42) is scheduled to make his second straight start against the Reds in Wednesday's series finale. Houser gave up seven hits and five runs in five innings of a 10-5 last Thursday. He is due to be opposed by RHP Vladimir Gutierrezz (0-5, 8.86), who was rocked for eight hits and seven runs in Cincinnati's 18-4 loss at Milwaukee on May 4.