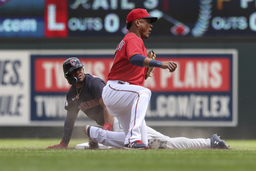 MINNEAPOLIS (AP) Joe Ryan allowed one run over six innings and was backed by solo homers from Byron Buxton and Gio Urshela as the Minnesota Twins beat the Cleveland Guardians 3-1 on Sunday.

Ryan (4-2) threw a career-high 103 pitches and struck out five, with his only blemish a fourth inning changeup that Jose Ramirez hit over the right field fence for his eighth home run of the season.

"We really needed a good start from Joe Ryan and he gave us exactly what we were looking for," Twins Manager Rocco Baldelli said.

After walking a career-high five batters in his last start, Ryan did not issue a walk to Cleveland.

Buxton, who sat out Saturday's 3-2 to the Guardians, hit his 11th home run of the season in the fifth inning. Despite missing 12 games this season, his 11 home runs are second-most in the majors, trailing only Aaron Judge. Urshela's fourth-inning home run was his second home run in as many games.

"See ball, hit ball. Keep it simple," Buxton said of his approach. "Just go out there and try to have a quality at bat and everything else takes care of itself."

Minnesota leads the American League Central by three games over Cleveland and Chicago.

The Twins struck first, manufacturing a run in the opening frame. Luis Arraez walked and then stole second base before Max Kepler hit a two-out single to right field to bring him home. The Guardians tied the game in the fourth inning with Ramirez's home run. But the lead didn't last long.

In the bottom of the inning, Urshela jumped on the first pitch he saw, launching a 386-foot home run into the left field porch, his third of the season.

While the Twins capitalized on their opportunities, the Guardians struggled to capitalize on their chances. Cleveland had a runner reach second base in four separate innings, including in sixth and eighth inning, but could not convert on any of the opportunities.

"I think that game should've been tied going into the eighth. I think we had a chance to win all the way through," McKenzie said.

Reliever Cody Stashak pitched a scoreless seventh inning and Joe Smith and Caleb Thielbar combined to pitch the the eighth. Smith has not allowed a run in 12 1/3 innings this season. Emilio Pagan finished the job with the save in the ninth.

Baldelli expects Buxton to keep getting a day off after playing a couple games in a row as the outfielder continues to deal with swelling with his knee.

"You have to listen to your body and that's something I'm starting to do a little bit more, which has allowed me to stay on the field longer," Buxton said.

Guardians: The team will wait to reevaluate RHP James Karinchak (right shoulder strain) in person until they are through concerns with COVID-19. Karinchak has been shut down since early-April. He is scheduled to throw his first live batting practice on May 20 in Arizona.

Twins: Baldelli said they hope to see SS Carlos Correa return this week. Correa (right middle finger contusion) is eligible to return from the 10-day injured list on Monday and he will travel with the team to Oakland.

"I do think that over the last couple of days, he's made some significant improvements, and he's feeling a lot better," Baldelli said.

Guardians: Cleveland has an off-day on Monday before hosting the Cincinnati Reds for a two-game series beginning Tuesday. RHP Zach Plesac (1-3, 4.68) will start in the series opener for the Guardians while RHP Connor Overton (1-0, 1.59) will start for the Reds.