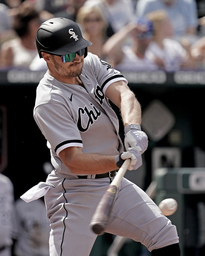 Robert delivered a pair of RBI singles before hitting a two-run homer into the left field stands in the eighth. His sixth home run of the season capped Chicago's sixth come-from-behind win.

"I was trying to not strike out," Robert said. "I was just trying to put the ball in play. I was expecting a fastball and he just made a mistake and I took advantage of it."

Pinch-hitter Adam Engel gave the White Sox their first lead with an RBI single in the seventh off Gabe Speier (0-1) that broke a 4-all tie.

"Guys at first and third, I was already in a good situation there," Engel said. "Just had to put the ball in play and keep it up the middle there the best that I can. In order to do that I just looked for a pitch over the plate and tried not do too much."

"I was just trying to get a run in and get that egg off the board," Anderson said of stealing second and third ahead of Robert's first RBI single, opening the White Sox scoring in the third. "I was being myself, playing my game, and having fun while doing it. Just putting us in the best position to be successful."

Said Chicago manager Tony La Russa: "He's very special. He's as special as our fans think he is. The more people around the country that know it, the better."

Chicago took three of five from the Royals. It was the first five-game series at Kauffman Stadium since Chicago also won three of five in April 2018.

Bennett Sousa (2-0) earned the victory as four Chicago relievers held Kansas City scoreless over the final four innings. Liam Hendriks worked around a pair of singles for his 12th save.

Hunter Dozier had three hits and drove in three runs for the Royals. He had a two-run homer in the first and an RBI single in the third.

Kansas City scored in each of the first three innings against Vince Velasquez, recording an extra-base hit in each frame. He went five innings, allowing four runs on six hits, fanning three.

"It seemed like my stuff was working very well today, but they were just guessing right," Velasquez said. "Dozier was hunting fastballs the whole time. I could have been a bit better with executing fastballs up at the top of the zone. I'm not really happy with the outing."

"(Hernandez's) tempo was a little bit slow," Royals catcher Sebastian Rivero said. "He was trying to think on too many things at one time. He was not feeling the ball. He couldn't grip it the way he wanted to. The ball wasn't doing what he wanted."

Chicago loaded the bases on consecutive hits to start the fourth before Anderson hit a two-run single, driving Hernandez from the mound.

Royals OF Michael A. Taylor was placed on the COVID-19-related injured list.

Royals OF Dairon Blanco was selected from Triple-A Omaha.