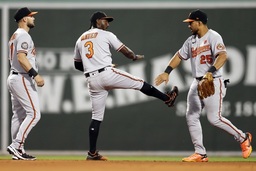 BOSTON (AP) Tyler Wells pitched six smooth innings of two-hit ball and the Baltimore Orioles got early homers from Ryan Mountcastle and Ramon Urias in a 10-0 victory over the Boston Red Sox on Monday night.

Anthony Santander sealed Baltimore's third win in the five-game series with a three-run homer in the ninth. The Red Sox, who had won nine of 12 and taken their last four series, were shut out for the third time this season and finished with only four hits.

Wells (2-4) struck out three and matched his career best by going six innings. He allowed only a single by Trevor Story in the second and Xander Bogaerts' double in the fourth. Story also drew a walk in the fifth, but Wells didn't allow another baserunner before being replaced by Dillon Tate in the seventh.

"Wellsy set the tone for us, but we also swung the bat extremely well," Orioles manager Brandon Hyde said. "We haven't had many games where we get a nice lead for a starter and allow him to kind of go for a while, and we did that tonight."

The Red Sox didn't get their third hit until Christian Vazquez doubled in the eighth and reached third, but that was as close as Boston got to scoring.

Red Sox veteran Rich Hill (2-2) was in trouble from the start after hitting Austin Hays with the third pitch of the night, then getting tagged by Trey Mancini for a triple when the ball took a funny bounce in left-center that caught Kike Hernandez by surprise. Mancini tried scoring when a pitch got through Vazquez, but Hill got home in time to cover and made a nice tag off a quick flip from the catcher.

The play left the bases empty for Mountcastle, who drove a 3-2 pitch over the Green Monster for what would have been a two-run homer. Instead, the solo shot put the Orioles up 2-0.

"It seems like that was sort of like the first time we really just put a team in the dirt a little bit early. It felt good to get out to a big lead and hopefully we can keep it going during the homestand," said Mountcastle, who finished 4 for 5 to tie his season high for hits.

Mountcastle singled in the third and scored when Urias homered to center. Hill was pulled in the fifth after a leadoff walk to Mancini and Mountcastle's double down the left-field line. Hirokazu Sawamura inherited two runners in scoring position and nobody out and both scored, adding two more runs to Hill's line and giving the Orioles a 6-0 lead.

Hill entered having allowed four or fewer runs in his last 79 starts, a streak that dated back to May 2018. Hill threw 92 pitches in four-plus innings, allowing six earned runs on seven hits and two walks. He struck out five.

Boston manager Alex Cora said Hill was having trouble locating his pitches early and his night unraveled from there.

"I think from the get-go fastball command wasn't there and the breaking ball didn't play today," Cora said.

Hyde said Wells has been adapting well since moving over this season from long relief to starting. Wells also went six innings May 9 against Kansas City, which was his only previous win as a starter in the majors.

"Being in Fenway, it's always a lot of fun to play in because the energy is so good even if you are a rival," Wells said. "The atmosphere right now in the clubhouse is great. It feels awesome to be able to take the series from them and being able to have a happy flight home."

Plate umpire John Tumpane exited in the seventh after getting hit by a foul ball.

Tumpane didn't have a chance to move when Mountcastle fouled off a 96 mph fastball from Ryan Brasier and the ball deflected slightly, hitting Tumpane square in the protective face mask and knocking it off.

Tumpane remained on his feet as a member of Boston's athletic training staff came out of the dugout and spoke with him behind home plate. After a few minutes, Tumpane headed into the Red Sox dugout and went up the tunnel for further evaluation.

The game resumed about 10 minutes later. First base ump Adrian Johnson moved behind the plate.

Red Sox: Placed LHP Matt Strahm on the COVID-19 injured list and recalled Sawamura from Triple-A Worcester. Strahm allowed four runs late in Friday night's 12-8 loss to the Orioles, snapping a nine-game streak of scoreless relief appearances. Sawamura was just optioned to Worcester on Saturday and did not appear for the minor league club before being recalled.

Orioles: Hyde said the Orioles plan to use a spot starter for a few innings Tuesday night when Baltimore opens a three-game series at home against the Mariners and RHP George Kirby (0-1, 4.50 ERA).