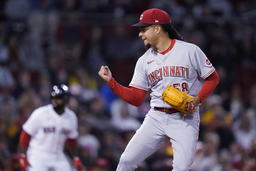 BOSTON (AP) Joey Votto spiked a long fly ball off the top edge of the short right-field wall in front of the Red Sox bullpen in the fifth inning. It popped into the air and back into play for a double.

Then, in the eighth, he did the same thing, only to the 37-foot high Green Monster in left.

Two hits, two doubles - and perhaps a total of two inches from being a pair of home runs.

"I don't think I have (seen that), to come that close to two home runs in really almost identical plays to different parts of the ballpark," Reds manager David Bell said after Cincinnati held on to beat Boston 2-1 on Tuesday night.

"We went over the ground rules before the game and they talked about that," he added. "You listen, but you don't actually think it's going to happen."

Luis Castillo struck out 10 while pitching six innings of one-hit ball, and the Reds held off a ninth-inning Boston rally to snap a nine-game losing streak against the Red Sox and win at Fenway Park for the first time since Game 7 of the 1975 World Series.

"Haven't played here a lot, but still, it's a big deal," Bell said.

Cincinnati scored both runs on Red Sox throwing errors. Castillo (2-2) walked three before leaving with a 1-0 lead after six and two relievers delivered a one-hit shutout to closer Tony Santillan.

Kike Hernandez singled to lead off the ninth and Rafael Devers doubled to put runners at second and third. After Santillan retired J.D. Martinez and Xander Bogaerts, Alex Verdugo hit a chopper that Votto couldn't handle at first, allowing one run to score on the single.

Santillan then struck out Trevor Story on three pitches to earn his fourth save.

Michael Wacha (3-1) retired the first 12 batters of the game before Votto's first double. Wacha started in a Boston loss for the first time since opening week despite allowing zero earned runs on three hits and striking out three.

The Red Sox have scored a total of one run in back-to-back games against a pair of last-place teams that enter June a combined 22 games below .500.

Votto's double in the eighth bounced off the red line on the front corner of the top of the Green Monster and back into play. To be a homer, it would need to clear the line, which runs along the edge of a small shelf that keeps fans from reaching over the wall and interfering with live balls.

It's not uncommon for home runs to clear the line and still bounce back onto the field, which is misleading to umpires and a frequent source of replay reviews at Fenway.

The Reds did challenge, but replays showed conclusively the ball remained in play.

"I've never seen that in my life," Castillo said. "Of course it would happen to one of the veteran guys like Joey Votto, who has gone through everything."

Votto said he was more concerned about putting a good swing on the ball than on the results. He went 1 for 9 in his only other trip to Fenway, in 2014.

"The last time I was here I was hurt, and I felt like I got bullied by the fans," he said. "Normally I do answer back, but I wasn't at my very best, whereas now, I feel healthy, I feel strong and I feel like I'm in a good place. And when they start giving it to me, I feel like I can answer back."

The Red Sox are 12-2 against the Reds in interleague play, winning each of the previous nine games, and the first five at Fenway Park. The teams also met in the 1975 World Series, which Cincinnati won in seven games one day after Carlton Fisk's arm-waving, 12th-inning homer in Game 6. (The teams split the four games at Fenway.)

The Reds hadn't visited Boston in 2014, which is perhaps why no one noticed that their plaque on the Green Monster's manual scoreboard misspelled their hometown as "CINN."

Reds: OF Tommy Pham was scratched from the lineup about two hours before the first pitch with a sore left calf. He had just finished a three-game suspension for slapping Giants outfielder Joc Pederson over a fantasy football dispute. ... RF and leadoff hitter Tyler Naquin left the game with a left quad strain. Aristides Aquino replaced him.

Red Sox: Devers was in the on-deck circle when he was hit in the chest by Hernandez's checked swing foul ball. After Hernandez made the last out of the third, Devers took his position at third base.