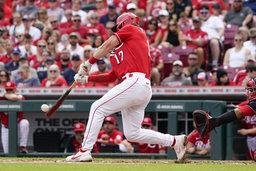 CINCINNATI (AP) The Nationals trailed by four runs with one out in the seventh inning when Juan Soto hit a fastball from Reds reliever Alexis Diaz 419 feet into the right-field seats for a three-run homer.

Soto's second homer of the day energized the Nationals, who scored seven runs in their final three at-bats to rally for a 10-8 victory over the Cincinnati Reds on Saturday.

Washington, like Cincinnati languishing in the basement of its division. tied the score in the eighth inning on an RBI double by Luis Garcia, then took over in the ninth on Maikel Franco's two-out, run-scoring single and a single by Garcia that drove in two more off Reds reliever Hunter Strickland (0-2).

"(In the) dugout, I tell the guys to keep good energy," said Soto, who had the 12th multi-homer game of his career. "Whenever we do something like that, everybody gets motivated."

Tanner Rainey, the last of six Nationals pitchers, came on in the ninth and gave up a homer to Brandon Drury and a single to Tommy Pham, but got Joey Votto to fly out to left and struck out Tyler Stephenson to end it.

"The boys battled back and the at-bats were getting better," Washington manager Dave Martinez said. "These guys don't quit."

Kyle Finnegan (2-1) , who pitched a hitless eighth inning, got the win for Washington, and Rainey picked up his seventh save.

Reds starter Tyler Mahle worked six solid innings, allowing seven hits and three runs, all in the fourth, and struck out six. Strickland (0-2) took the loss for the Reds.

It was in that fourth inning that Soto crushed a 423-foot homer to center. The three-run shot in the seventh gave him a dozen for the season.

"I was just trying to make contact, to get a couple barrels and saw the ball flying," he said. "For me, the work I've been doing the last couple weeks has been working. It's been getting better and better, and we will see how it ends up."

The Reds put two runners on in the fifth, chasing Nationals starter Erick Fedde. Reliever Jordan Weems walked the bases full and walked in a run in before Albert Almora hit a 1-1 slider into the left-field seats for his second homer of the season and his first grand slam since 2019, when he played for the Cubs.

"We haven't had too many like this," Reds manager David Bell said. "When we get a lead, our bullpen has done a nice job for the most part. They're going to happen. We kind of had it lined up the way we wanted, and it was really just a tough day."

Soto timed his leap at the right-field wall just right in the first inning to rob Votto of what would have been his third three-run homer in as many days. Votto's single his next time up was his 2,049th hit, good for fifth place in Reds history, one ahead of Hall of Famer Johnny Bench.

Franco was 3 for 5 to push his season average to .270. The Nats third baseman is 13 for 37 with three doubles, five RBIs and three runs scored in his last nine games. This was his fourth multihit game in that stretch.

After a good outing on Friday night with Triple-A Rochester, Nationals right-hander Stephen Strasburg was expected to join the team in Cincinnati on Saturday. Manager Dave Martinez said he expected to talk to Strasburg after the game to see how soon he can plug him into the rotation.

The Nationals send left-hander Patrick Corbin (1-8, 6.96 ERA) against Reds right-hander Luis Castillo (2-2, 3.38 ERA) in the series finale on Sunday. Corbin was pummeled in his last start Tuesday against the Mets. He allowed seven runs and 12 hits in 4 1/3 innings and took the loss. Castillo gave up one hit and no runs through six innings in Tuesday's win over the Red Sox.