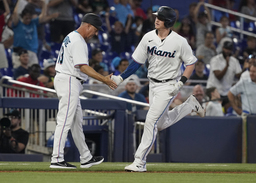 Curt Casali had two hits and scored twice for the Giants, who split the four-game series with Miami and finished 5-5 on their three-city swing.

"It's always nice to win the last one of a road trip," manager Gabe Kapler said.

Junis (3-1) limited the Marlins to two hits and two walks. He struck out a season-high eight.

"He kept us off balance out there," Miami manager Don Mattingly said.

The right-hander has completed six innings in three of his last four starts.

"I'm just trying to stay consistent, not try to do too much," Junis said. "Pitch to my strengths. Whatever is working that day, stick with it."

The Giants stranded four runners through the first three innings before Walton's slam put them ahead 4-0 in the fourth. Walton drove the first pitch from Miami starter Braxton Garrett over the wall in right field for his first homer this season.

"First one as a Giant, very exciting," said Walton, who joined San Francisco in a May 11 trade with the Seattle Mariners. "Doing whatever I can to help the team win. I put a very good swing on it. Yeah, it felt amazing."

For Walton, it was also his first grand slam at any level.

"Youth league, never had a grand slam," he said. "I thought I never would get one."

The Marlins cut it to 4-1 on Garrett Cooper's homer in the sixth before Austin Slater's RBI single in the eighth gave San Francisco another four-run advantage.

Dominic Leone relieved Junis and pitched a perfect seventh. Tyler Rogers worked around two singles in a scoreless eighth before Camilo Doval closed in the ninth.

"We discussed this a lot the last couple of days - you're going to have ups and downs with the bullpen," Kapler said. "We handed the ball to the guys who we believe in for a long while now."

Garrett (0-1) was lifted after Walton went deep on a breaking ball. Recalled from Triple-A Jacksonville before the game, Garrett allowed four runs and four hits in 3 1/3 innings. He walked one, struck out five and hit two batters with pitches.

"It was a bad slider," Garrett said. "Whether that was the right pitch or not, it was a hanger."

Walton had another opportunity with the bases loaded in the fifth. Evan Longoria walked, Luis Gonzalez singled and Thairo Estrada walked. But reliever Tommy Nance got Jason Vosler to ground into a force at home before striking out Casali and retiring Walton on a grounder to second.

"Walking up, you're (like) here we go again," Walton said. "I wasn't trying to do anything different, just the same approach as the first time."

Doval, who usually pitches the ninth, made appearances in the sixth inning Thursday and Saturday. Kapler said there will be other high-leverage situations before the ninth that will require going to Doval.

Giants: RHP Alex Cobb (back tightness) threw from 75 feet Saturday and could make his next scheduled start. Cobb was scratched Friday against Miami. ... 1B Brandon Belt (right knee inflammation) continues to trend in the right direction but is not quite ready to join the club yet.

Giants: LHP Carlos Rodon (4-4, 3.44 ERA) will start the opener of a three-game home series against Colorado on Tuesday.

Marlins: RHP Edward Cabrera (1-0, 0.00) makes his second start of the season Tuesday in the opener of a home series against Washington.