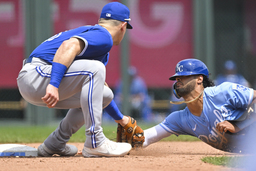 KANSAS CITY, Mo. (AP) Mike Matheny spent about 20 minutes in the dugout before his Kansas City Royals took the field against the Toronto Blue Jays on Wednesday and tried to put what has been a miserable 20-game stretch into perspective.

They took care of a couple of them in their series finale against Toronto.

Kansas City finally managed to get into hitter's counts throughout the game, knocking out Blue Jays starter Yusei Kikuchi before the end of the first inning, and rolled the rest of the way to an 8-4 victory that ended a three-game losing streak.

"I mean, it's helpful when you start talking about hitter's counts instead of pitcher's counts," Matheny said afterward. "We have been on the other side of that, where you have to go to the bullpen early and have to kind of navigate things."

Brady Singer allowed home runs to Raimel Tapia and Zack Collins but only allowed one other run in five tough innings. He improved to 3-1 in his five starts while the rest of the Kansas City rotation is 3-25 in 50 combined starts.

"I felt like I battled," Singer said. "Gave the team a chance to win."

Kikuchi retired only two batters while walking four and serving up two hits that cost him three first-inning runs - two more than Kansas City scored in its last four games against the Blue Jays, including a pair of shutouts to start the series.

Toronto briefly tied the game 3-all before Trevor Richards (2-1) allowed three more runs in the fourth and fifth innings.

"It gets tough," Blue Jays manager Charlie Montoyo said, "because you've got to cover eight, nine innings when the bullpen is already thin. So like I always say, pitching and defense wins. If Kikuchi comes throwing strikes, we have a good chance.

"Credit to our team that we still battled back and were in the game," he added, "but it was too much to overcome."

Given how much trouble the Royals have had scoring runs lately - they'd gone 18 straight innings without getting anyone across home plate - they no doubt welcomed the Kikuchi's wayward ways on Wednesday.

He started by walking Andrew Benintendi and Bobby Witt Jr. to set up Melendez's two-run bloop double. Then, the left-hander walked Santana before Rivera's run-scoring base hit. And to finish things off, Kikuchi walked Michael Taylor before Montoyo brought in Trent Thornton to deal with a bases-loaded mess.

Thornton got a dazzling snare from shortstop Bo Bichette to prevent more runs from scoring.

It didn't take Singer long to cough up the Royals' lead: He served up homers to Tapia in the first and Collins in the third, both on 3-2 counts, along with Vladimir Guerrero Jr.'s RBI grounder that knotted the game 3-all.

"We're going to enjoy this one," Matheny said. "Made the promise to myself that we're going to stop and enjoy them when things come together the right way. I told the guys, `Enjoy dinner with your family and don't forget to smile.'"

Blue Jays: LHP Tim Mayza (forearm inflammation) had a rehab outing for Triple-A Buffalo on Wednesday and could rejoin the club in Detroit. RHP Nate Pearson (mononucleosis) also planned to pitch for the Bison in their doubleheader.

Royals: OF Hunter Dozier is dealing with "something in his side" that flared up in an at-bat Monday, Matheny said. It kept Dozier out of the lineup for the second straight day. "They're still checking it out," Matheny said.

The Blue Jays are off Thursday before sending RHP Jose Berrios (4-2, 5.24) to the mound to open a three-game set against the Tigers on Friday night. The Royals continue their season-high 10-game homestand Thursday night with LHP Kris Bubic (0-3, 9.33) getting the start against the Orioles in the opener of a four-game series.