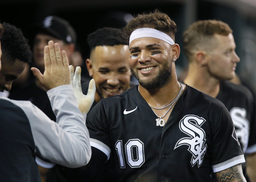 Abreu sent a soaring shot over the left-center fence in the first to give the White Sox a 2-0 lead. He hit a line drive in the ninth over a row of hedges beyond the wall in center to give Chicago a four-run cushion.

"He put on a heck of an exhibition," manager Tony La Russa said.

White Sox right-hander Lance Lynn made his season debut, coming back from surgery on his right knee, and gave up three runs on 10 hits over 4 1/3 innings.

"It felt good to be back," he said. "Early on, you're trying to feel things out and they jumped on me."

Lynn had a heated exchange with Chicago third base coach Joe McEwing in the dugout after the second inning.

"(Lynn) was mad at himself," La Russa insisted.

Bennett Sousa (3-0) was credited with the win after throwing 1 1/3 innings of scoreless relief.

After Will Vest threw an inning of scoreless relief, Andrew Chafin entered for the Tigers and made a costly throwing error in the sixth. Chafin fielded Reese McGuire's sacrifice bunt and threw wide of third base, allowing two runs to score that gave Chicago a 6-3 lead.

"There's no turbulence in this clubhouse," La Russa said.

Detroit has dropped six of nine.

Detroit left-hander Eduardo Rodriguez has been placed on the restricted list. General manager Al Avila announced Monday that Rodriguez informed the Tigers that he will not rejoin the team due to personal matters.

The Tigers signed Rodriguez to a $77 million, five-year contract last November, banking on him to boost a turnaround. He and the team have struggled. Rodriguez is 1-3 with a 4.38 ERA in eight starts and the Tigers have been one of baseball's worst teams so far this year.

Willi Castro's homer was the first for the Tigers after an eight-game streak without one that marked the franchise's longest since a 10-game drought from late in the 1989 season to early in the 1990 season.

Detroit second baseman Kody Clemens, the 26-year-old son of seven-time Cy Young Award winner Roger Clemens, ended the 0-for-17 start of his career with a single in the second inning and thrust his hands in the air at first base to celebrate his first major league hit.

"Everyone is going to fail at this game," Clemens said after going 2 for 2 with a walk. "I wanted to get the first one out of the way, but I've been staying super positive."

White Sox: DH Jake Burger left midway through the game with a bruised right hand after being hit by a pitch on a swing. X-rays were negative and he's day to day. ... C Yasmani Grandal went on the 10-day injured list, retroactive to June 12, with lower back spasms. ... RHP Michael Kopech had fluid drained out of his right knee, according to La Russa, and will throw a bullpen before it is determined when he will pitch again. ... Two-time All-Star RHP Liam Hendriks was not available due to a sore arm, but the closer did play catch before the game and La Russa said Hendriks is a day closer to returning. ... RHP Vince Velasquez, on the IL with a strained groin, may return to pitch Wednesday.

Chicago placed RHP Ryan Burr on unconditional waivers for the purpose of granting his release. He was 1-1 with a 6.00 ERA in eight games this year after he had a 2.45 ERA in 34 appearances last season.