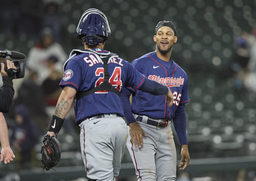 "It's definitely the way you want to start a road trip coming out to the West Coast," Twins manager Rocco Baldelli said.

Buxton, fresh off an American League player of the week award, hit a two-run shot to right-center field off Chris Flexen in the first inning. It was his fourth home run in five games against Seattle this season. In his last eight games versus the Mariners, Buxton is 15 for 32 with six homers.

"I haven't missed too many. I couldn't say this about a week and a half ago," Buxton said. "You could have threw me a whole basketball and I was going to miss it."

Buxton added a soft single to left in the seventh and scored on Max Kepler's single to make it 3-1.

Taylor Trammell homered for the Mariners, and Ty France knocked in a run with an infield single.

"Not a whole lot going our way right now," Seattle manager Scott Servais said. "It has been a struggle here the last couple of days to get much going offensively."

Making his 12th start of the year, Archer went four innings and allowed only an unearned run. He gave up four hits, struck out three and was lifted after 67 pitches.

In his last three starts, the right-hander has permitted just two runs over 14 innings.

Archer dealt with a string of injuries from 2019-21, so Minnesota has limited his workload. He hasn't gone more than five innings in a game this season, and his highest pitch count was 79 on April 30.

Caleb Thielbar (2-0), the first of six Twins relievers, struck out two in a hitless inning. Emilio Pagan worked the ninth, fanning Jesse Winker with a runner on second for his ninth save.

After the early blow by Buxton, Flexen (2-8) didn't allow a run over the next four innings and got himself out of jams in the second and fifth. The right-hander pitched five innings, yielding two runs and seven hits while striking out five.

PLAYER OF THE WEEK

Buxton batted .333 with five homers, seven RBIs and eight runs scored last week. He homered in three straight games from Wednesday to Friday. It's the second time Buxton has been selected AL player of the week. The other time was in August 2017.

Twins: Transferred RHP Cody Stashak to the 60-day injured list to clear a spot on the 40-man roster. Stashak is scheduled to undergo shoulder surgery this week. . INF Jorge Polanco didn't start due to back soreness. He will get a day or two off and then be evaluated, according to Baldelli.

Mariners: Rookie OF Julio Rodriguez received a scheduled rest. He pinch-hit for Trammell in the ninth and struck out.

Minnesota selected the contract of INF Elliot Soto from Triple-A St. Paul and optioned RHP Cole Sands to its top farm club. Soto was hitting .213 with two homers and 19 RBIs in 41 games for St. Paul. Sands started Sunday for the Twins, throwing 4 2/3 innings and allowing five runs in the loss to Tampa Bay.

Mariners: RHP Logan Gilbert (6-2, 2.41 ERA) makes his 13th start of the season. Last time out at Houston, he allowed three runs and seven hits in six innings to pick up the win.