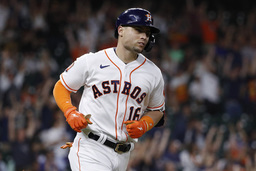 HOUSTON (AP) Whit Merrifield, Hunter Dozier and Emmanuel Rivera all homered as the Kansas City Royals roughed up Cristian Javier early and held on for a 7-4 win over Houston on Wednesday night, ending the Astros' major league-best eight-game winning streak.

Javier (6-4) had allowed one hit in 14 innings over his last two starts, which included seven innings of a combined no-hitter against the Yankees on June 25. He struck out 27 in those two appearances, both wins. But the Royals got to him almost immediately.

Merrifield sent Javier's third pitch into the seats in left field for his fourth homer this season. Javier walked Andrew Benintendi before Dozier's two-out shot to the Crawford Boxes in left field made it 3-0. Rivera homered to left-center in the second.

Brad Keller (4-9) allowed five hits and four runs in 5 2/3 innings and the Royals' bullpen shut the Astros down the rest of the way. Scott Barlow allowed one hit in a scoreless ninth for his 13th save.

"I was just real proud of the offense," manager Mike Matheny said. "Coming out, even though the last couple of days we get something going and not being able to put it away, but (we) come back resilient and aggressive. And you can tell they believe in themselves and that's a beautiful thing."

Kansas City was clinging to a one-run lead entering the ninth inning before Nicky Lopez hit a ground-rule double with one out and scored on a two-out double by Andrew Benintendi. MJ Melendez followed with an RBI single that pushed the lead to 7-4.

"They jumped us early," manager Dusty Baker said. "They were hitting the ball out of the ballpark and the game boiled down to, they really beat us in the first and the ninth. It was a bookend game for them."

Javier yielded five runs on four hits with three walks and seven strikeouts in five innings for his first lost since June 6. His three homers allowed tied a career high after he entered the game having given up just five all season.

Matheny was asked about the key to his team's success against Javier.

"It's just some of that momentum," he said. "It's always a really good thing for an offense to have. Guys have just been building on what they've seen the last couple of days."

Aledmys Diaz homered for a second straight game and Jake Meyers had two hits and two RBIs. But the Astros were unable to overcome their early deficit after come-from-behind wins in the first two games of the series.

Houston cut the lead to 4-1 on an RBI double by Meyers with two outs in the second.

Benintendi walked again to open the third before scoring on a two-out double by Dozier that made it 5-1.

The Astros got within 5-3 in the fourth on Kyle Tucker's run-scoring single and Meyers' RBI groundout.

There were two outs in the sixth when Diaz homered to cut the lead to one and chase Keller. Reliever Jose Cuas loaded the bases before getting out of the jam.

Royals: Rookie INF Bobby Witt Jr. was out of the lineup a day after fouling a pitch off his right hand. X-rays Tuesday night were negative, but Matheny said he was awaiting the results of more extensive tests.

Astros: 2B Jose Altuve and 1B Yuli Gurriel got rare days off for rest. ... LHP Parker Mushinski (left elbow discomfort) allowed two hits, two runs and walked two without getting an out in the first game of a rehabilitation assignment with Triple-A Sugar Land Wednesday night. He threw 20 pitches.