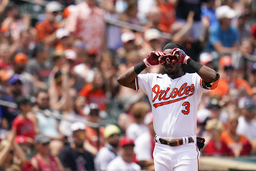 BALTIMORE (AP) Quite unexpectedly and for the first time in years, the Baltimore Orioles enjoyed a week filled with victories, cheering fans, hugs and high fives.

Baltimore fell behind 2-0 before storming back to complete a 7-0 homestand and its first four-game sweep of the Angels since 2003. The Orioles had not won eight consecutive games in a season since April 22 to May 1, 2005, though they won 12 straight across two seasons in late 2015 and early 2016.

It's been quite an exhilarating stretch for a rebuilding team that lost more than 100 games in three of the last four years, the exception being the pandemic-shortened 2020 season.

"I've been waiting for a week like this for a long time, for most of my career," said designated hitter Trey Mancini, who broke into the majors with Baltimore in 2016. "It's something that I certainly don't take for granted. We're just having a really good time in here, playing so well as a team."

Urias singled in two runs during a four-run fourth and added an RBI single in the fifth to make it 8-2. That put the Orioles (43-44) on course to move within a game of .500 for first time since starting 0-1.

"You know, I had higher hopes this year for us as a team, but I don't think I could have imagined the team camaraderie being what it is," Mancini said. "It's just all aligned really well for us."

Monte Harrison and Max Stassi homered for the sinking Angels, who now sit a season-worst 11 games under .500 at 38-49 after a 1-8 swing that began in Houston and Miami.

This was a particularly sloppy performance by Los Angeles. During Baltimore's four-run fifth, not only was there a fielding error and a balk, but one run scored on a passed ball and another on a wild pitch.

"That's just frustrating. We didn't play a sound defensive game in a couple spots," interim manager Phil Nevin said. "We've got to keep grinding. I know what it looks like right now and I know where we're at. We've got a lot of good players. We're a team that has to play crisp, clean baseball and we didn't do that today."

Austin Voth (1-1) pitched five innings to earn his first victory with the Orioles since being claimed off waivers from Washington on June 7. Voth, who pitched for the World Series champion Nationals in 2019, noticed some similarities between that team and this one.

"In 2019 what we had was good chemistry and guys coming together and joking around and playing well," he said. "I'm starting to see that here."

Harrison gave the Angels a 2-0 lead in the third with his second career homer, a two-run drive to right. After celebrating his first long ball since August 2020 with the Marlins, he had to wait through a video replay because the Orioles questioned whether he actually touched first base.

LA starter Jose Suarez (1-3) retired his first 10 batters before walking two and hitting another in the fourth. The lefty gave up an RBI double to Ryan Mountcastle, a two-run single to Urias and was lifted after Rougned Odor singled in a run.

Orioles: OF Austin Hays was given the day off to rest his sore right wrist, which hasn't been at 100 percent since he was struck by a pitch Monday against Texas. ... RHP Travis Lakins (right elbow inflammation) was transferred to the 60-day IL.

Orioles: After taking Monday off, Baltimore sends RHP Jordan Lyles (5-7, 4.50) to the mound Tuesday night in the opener of a two-game series at Wrigley Field against the Cubs.