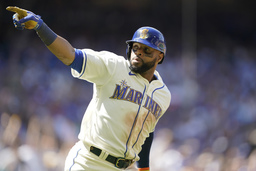 SEATTLE (AP) Blue Jays first baseman Vladimir Guerrero Jr. had a throw bust through the webbing of his glove and the Seattle Mariners took advantage for their eighth straight win, beating Toronto 6-5 Sunday on two home runs by Carlos Santana.

A day after Santana hit a two-run homer in the seventh inning for a 2-1 win, he connected for a go-ahead, two-run drive in the eighth. The Mariners are 16-3 for their best 19-game stretch since 2003.

"Everything is positive right now, so we have to keep it up," Santana said. "The energy is great. The fan support, in the clubhouse, teammates are great. When you see that, everything is great."

Blue Jays starter Max Castillo was pulled in the fifth with a 4-1 lead after giving up a pair of one-out singles, and reliever David Phelps walked Justin Upton to load the bases.

Sam Haggerty then grounded back to Phelps, who threw home to start what appeared to be an easy inning-ending double play. But catcher Gabriel Moreno's throw broke through Guerrero's first baseman's mitt, allowing a run to score.

Guerrero kept looking in amazement as his glove while Phelps, who had begun to twirl off the mound in celebration, suddenly stopped. Julio Rodriguez followed with an RBI single that cut Toronto's lead to 4-3.

This is the second time in a month Guerrero has had trouble with his glove. He had a ball go through the webbing in a win against the Orioles on June 13.

"You know that changed the game," Montoyo said. "I've seen it twice this year. Usually it doesn't happen to the same guy and it happened to the same guy."

Bo Bichette had a homer, two singles and drove in three runs for the Blue Jays, who were swept in the four-game series and have lost nine of their last 10.

George Springer homered on the first pitch of the game for the Blue Jays, his 17th home run of the season and his 51st career leadoff homer. Raimel Tapia also homered for Toronto.

Santana, acquired from Kansas City in late June, hit a leadoff homer in the second.

"It's like he's been here all year," Seattle's Ty France said. "He's part of the family now and we're happy to have him here and we've been rolling."

Moreno dropped a popup by J.P. Crawford to begin the Seattle eighth. Santana connected off Adam Cimber (8-3) for his seventh home run this season, three for the Mariners.

The Mariners tied it at 4 on Cal Raleigh's sacrifice fly in the sixth. Bitchette homered in the seventh.

Matt Festa (1-0) pitched a perfect eighth for the win and Paul Sewald picked up his 10th save.

The series sweep pulled the Mariners into a tie with Toronto for the AL's third wild-card spot. The Mariners are looking to make the playoffs for the first time since 2001. " You can't celebrate anything. We're not there," Seattle manager Scott Servais said. But everybody knows the drought. It rains a lot in Seattle, so we've got to end the drought."

Rodriguez was named to the All-Star team during the game. France, who was one of the two finalists for the AL first baseman spot, was not among those selected. "There's a lot of good players, and not to take anything away from any of them, I definitely thought I played my way in there," France said.

On Saturday, the Mariners optioned rookie starter George Kirby to Triple-A Tacoma to reduce his workload. Seattle manager Scott Servais said he expects Kirby to make one start of two or three innings at Tacoma and return to the Mariners' rotation after the All-Star break. In his place on Wednesday at Washington, Seattle may have a bullpen day or start long reliever Tommy Milone, Servais said. Marco Gonzales will start Thursday in Texas.

Blue Jays: Toronto has an off day Monday and has not announced a starter for Tuesday's home game against Philadelphia.