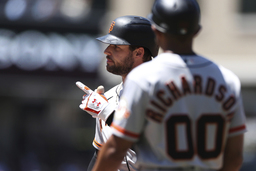 Wood took a no-hitter into the sixth, and Wilmer Flores had two home runs among his four hits and four RBIs in a 12-0 rout of the Padres on Sunday.

The Giants, who have been scuffling for three weeks, dominated the Padres in taking the final two of the four-game series. Wood's brilliant effort Sunday followed Carlos Rodon's overpowering performance Saturday, when he struck out 12 in a three-hitter.

"There's always friendly competition, right?" Wood said. "Somebody goes out there the day before and dominates, you want to follow that up with a really good quality start the next day."

Wood (6-7) did just that. He walked All-Star Manny Machado with one out in the first and didn't allow another baserunner until rookie C.J. Abrams stroked an opposite-field single to left on the left-hander's second pitch of the sixth. The Padres had gone 12 innings without a hit going back to the second inning Saturday.

Wood went seven innings, allowing three singles while striking out eight and walking one on 83 pitches.

"It was a good day today," Wood said. "It was the best my slider has been all year, for sure. Yesterday you get just an incredible start by 'Los, great defense. The boys came out banging today and played good defense."

It was the first time the Giants won consecutive games since June 16-17 at Pittsburgh.

"Nice performance by the guys," manager Gabe Kapler said. "Just kind of staying loose through these times when we're struggling a little bit for an extended period of time, knowing that they're going to have games like this also on the other side.

As Wood was keeping the Padres off the base paths, the Giants were practically wearing them out while getting 17 hits and walking four times.

Flores and Thairo Estrada each hit a two-run homer off rookie lefty MacKenzie Gore (4-4), who lasted only 3 1/3 innings. Flores also homered in the ninth off Matthew Batten, who started for the Padres at third base. It was Flores' 12th.

Estrada homered in the second, his seventh. Flores went deep in the third. Both came with no outs against Gore, who allowed eight runs and eight hits.

Flores also drove in a run in the seventh when he lined a ball off the back of reliever Dinelson Lamet, who recovered and threw to first for the out.

Padres RHP Joe Musgrove (8-2, 2.09 ERA) was selected to the NL All-Star team for the first time. Going into Sunday's games he ranked first in the NL with 14 quality starts, third in ERA and fifth with a 0.93 WHIP. Musgrove, who grew up in suburban El Cajon and pitched at Grossmont High, threw the only no-hitter in Padres history in his second start with the team on April 9, 2021, at Texas.

Giants: RHP Alex Cobb (3-3, 4.74 ERA) is scheduled to to start Monday night in the opener of a three-game home series against Arizona, which will counter with RHP Merrill Kelly (7-5, 3.42).