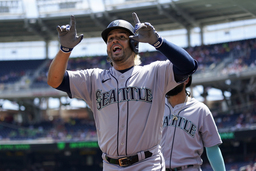 WASHINGTON (AP) Eugenio Suarez smacked a three-run homer, Chris Flexen pitched six solid innings to win his fourth straight start and the Seattle Mariners got their ninth straight win by beating the Washington Nationals 6-4 on Wednesday in the first game of a day-night doubleheader.

"We're winning games a lot of different ways and I think that's the mark of a really good team," said Winker, who returned after a six-game suspension for his role in a fight with the Los Angeles Angels on June 26.

Juan Soto, who was caught in a rundown between third and home on Nelson Cruz's double to end the seventh, tried to help the Nationals in the ninth inning with a three-run homer off Penn Murfee with two outs to make it 6-4. But Paul Sewald retired Cruz for his 11th save.

"At the end of the day, it feels more terrible when I hit the ball. Because the things that happened on the bases and everything, you can see how close the game (would) be," said Soto, who now has 18 home runs and a 14-game hitting streak.

Flexen (6-8) had a 3-0 lead before he threw a pitch and proceeded to give up one run on six hits, while walking two and striking out one. He has a 2.88 ERA over his past seven starts.

"To get an early lead like that forces you to want to step on the gas even more and stay in the zone," Flexen said. "I just tried to attack and compete and put us in a situation to win."

The Nationals, who have lost five straight and 11 of 12, also saw production from Keibert Ruiz, who had a double and a single.

Gray struggled with his control early, walking two of the first three batters in the first inning before Suarez homered to left on an 0-1 fastball.

"He had trouble settling in," Mariners manager Scott Servais said of Gray. "Oftentimes the most vulnerable starting pitchers are is in that first inning. He really didn't have a feel for the strike zone and we took advantage."

Winker's and Frazier's solo shots came in the fourth.

Washington loaded the bases against Flexen with no outs in the fifth, but settled for Luis Garcia's sacrifice fly to make it 5-1 before Flexen retired Josh Bell and Cruz around a walk to Soto.

The second game is a makeup of the game rained out Tuesday.

Mariners' All-Star center fielder Julio Rodriguez served a one-game suspension stemming from his involvement in the brawl with the Angels. All of the sanctioned Mariners have now served their suspensions.

Mariners RHP Erik Swanson (0-0, 0.79 ERA) will serve as the opener in Game 2 of the twinbill and LHP Tommy Milone, previously announced as the opener, will follow. The Nationals will start RHP Erick Fedde (5-6, 5.01 ERA), who has never faced the Mariners.