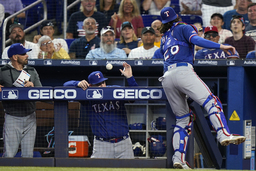 Garcia drove in three runs, helping Texas stop a four-game slide in the opener of an 11-game trip. Marcus Semien had two hits and reached base four times.

"Our players were excited to get back off the break and ready to play ball," Rangers manager Chris Woodward said. "We're going to be challenged, obviously, on this road trip travel-wise."

The Marlins lost their fourth straight, and their scoreless streak reached 34 innings. They last scored in the second inning of their 2-1 loss against Philadelphia on July 15.

Miami also tied a club record with its ninth consecutive game without a home run. Marlins teams in 1993 and 2019 had similar droughts.

"We're in a stretch where you're hoping the three-day break was going to be something that we'd bounce back and come out of this with some energy and it would look a little different, " Marlins manager Don Mattingly said. "But it hasn't so we've got to keep going and keep fighting."

"We had a great mix working, I don't think we relied too much on one thing," Gray said. "We've been on attack mode, not walking as many people."

Rangers shortstop Corey Seager rejoined the team in Miami after appearing in the All-Star Game. But he got the day off.

Texas jumped in front on consecutive RBI singles by Nathaniel Lowe, Jonah Helm and Garcia in the third. Garcia added a two-run shot in the fifth, driving the first pitch from Miami starter Pablo Lopez over the wall in right for his 16th homer.

"I was looking to make good contact, put the ball in play," Garcia said in Spanish. "Thankfully, I made a good swing and the ball took off."

The Rangers' lead changed Gray's approach for the rest of his outing.

"It takes a little stress off of me," Gray said. "If we're able to plate two or three runs early, that kind of put me in another mode. It didn't feel like I was on my heels."

Lopez (6-5) was lifted after five innings. The right-hander was charged with five runs and five hits.

The Rangers recalled infielder Ezequiel Duran from Triple-A Round Rock and sold the contract of outfielder Zach Reks to the Lotte Giants of the Korea Baseball Organization. Reks was designated for assignment Saturday.

The clubs originally were scheduled to meet in a three-game series. But the schedules were altered after the lockout ended in March, and the Rangers will make a separate trip to Miami. The additional two games will be a day-night doubleheader Sept. 12.

Jacob Berry, Miami's top pick and the sixth-overall selection in the 2022 draft Sunday, took batting practice and fielded grounders prior to the game. The Marlins already signed the infielder to a contract and will assign him to a minor league club soon.

"I'm thankful to get this opportunity to meet everybody in the Marlins organization," Berry said. "It's been unbelievable. There's not even one word I could use to describe this moment."

Rangers: RHP Spencer Howard (1-1, 6.97 ERA) will start the opener of a three-game series Friday at Oakland.

Marlins: LHP Braxton Garrett (1-3, 3.70 ERA) will start the opener of a three-game series Friday at Pittsburgh.