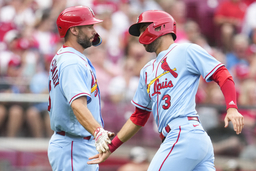 Nolan Arenado had three hits, including two of the Cardinals' six doubles. St. Louis tied its season high with eight extra-base hits and won for the sixth time in nine games.

Albert Pujols got two hits, increasing his total to 3,335. He twice narrowly missed homering, flying out to Tommy Pham a step short of the left-field wall and hitting a drive that curved just foul.

Pujols, 42 and in his final season, displayed some daring baserunning. Besides legging out his liner to left for a double, he tagged up and took second on Tommy Edman's flyout to left-center field and beat out a potential double-play ball.

O'Neill, in his second game in the Cardinals' No. 2 slot, broke a 2-2 tie with a two-run shot to straightaway center field in the fourth off Mike Minor (1-7), who lost his fifth straight decision.

"I want to get flowing up there," O'Neill said. "I'm feeling good at the plate. I'm seeing the ball good."

Goldschmidt followed with his team-high 22nd homer and second in two nights.

Goldschmidt reached 1,000 RBIs in the third, when he and O'Neill hit run-scoring singles for a 2-0 lead.

Steve Matz (4-3) won for the first time since May 2, returning from a left shoulder impingement that had sidelined him since May 22. But the left-hander left after straining his left knee in the sixth while trying to field Joey Votto's dribbler up the first-base line. Matz allowed two runs and three hits in 5 1/3 innings.

Matz is scheduled to get an MRI tomorrow, Marmol said.

Ryan Helsley got four outs, striking out the side in the ninth for his ninth save in 12 chance.

Brandon Drury hit a two-run double off the left-center field wall in the third. Jonathan India ran through a stop sign to score from first with a head-irst slide.

"I missed a lot over the plate," the left-hander said. "I was trying to go to one side and they went to the other side. My changeup was bad early on. I was getting behind and couldn't throw my off speed for a strike."

After falling on Friday to 0-7 in trip openers, the Cardinals improved to 7-0 in the second games of trips.

Cincinnati's Mark Kolozsvary, recalled Saturday from Triple-A Louisville, hit his first career home run in the seventh, a fly ball down the left-field line that reached the first row of seats.

Cardinals: OF Harrison Bader (planter fasciitis, right heel) went 1 for 3 as Triple-A Memphis's designated hitter in the first game of his rehab assignment. He was not in the Chicks' lineup on Saturday. The 2021 Gold Glove center fielder has been sidelined since June 27.

Reds: There remains no timetable on the return of C Aramis Garcia (left middle finger soreness), according to manager David Bell. Garcia has been out since July 7, and the loss on Friday of catcher Tyler Stephenson with a fractured right clavicle further hampers Cincinnati's depth.