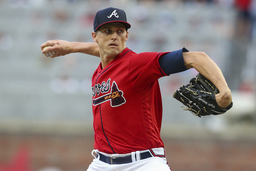 Riley had a homer and three RBIs, Kyle Wright earned his NL-leading 13th victory and the Atlanta Braves beat the Arizona Diamondbacks 5-2 on Friday night.

Riley homered in the first and drove in runs with doubles in the third and fifth. He has 11 homers, 24 RBIs and a .427 average this month.

"At the end of the day, as long as we're winning ballgames, that for me is what it's all about," Riley said. "If I can contribute in any way, that's what I'm here to do. That's what they've got me here to do. If I can do that, I feel like we're right where we need to be."

The defending World Series champion Braves stayed three games behind the New York Mets in the division. Atlanta had lost four of seven but improved to 37-14 since June 1, the best record in the major leagues over that span.

Wright has won six straight decisions and has a 2.93 ERA over his last seven starts. He gave up five hits and two runs with two walks and five strikeouts in 6 2/3 innings.

The Braves scored three times in the third to take a 4-0 lead. Michael Harris II walked and advanced on Ronald Acuna Jr.'s infield single. Harris scored when Dansby Swanson reached on a fielder's choice and third baseman Josh Rojas made a throwing error to second. Riley followed with an RBI double and Travis d'Arnaud with an RBI single.

Riley put Atlanta up 5-2 in the fifth with a double that drove in Swanson from first. His 29th homer in the first made it 1-0 as the ball barely cleared the left-field wall near the visitor's bullpen.

Riley extended his sizzling streak as he began the night ranked among the top six in the majors in extra-base hits, total bases, homers, hits, slugging percentage and OPS.

Wright pitched out of a jam with two runners in scoring position and no out in the third. Wright struck out Geraldo Perdomo and retired Rojas on a lineout and Alek Thomas on a groundout to end the threat.

He gave up his first hit and run with two outs in the fourth. Daulton Varsho singled to advance a runner to third, and Jake McCarthy singled to trim the lead to 4-1. Perdomo hit his third homer to make it 4-2 in the fifth.

"Really, I didn't throw the ball that well," Wright said. "My fastball was OK. Changeup wasn't very good. I was able to use my cutter a little bit. I just really relied on my curveball big-time today. I was able to throw it for strikes and get chases and get groundballs. It really wasn't pretty. I thought I was a little rocky at times."

After a single by Rojas chased Wright with two outs in the seventh, Dylan Lee struck out pinch-hitter Jordan Luplow with runners on first and second. Collin McHugh pitched the eighth for Atlanta, and Kenley Jansen recorded a shaky 24th save in 28 chances after facing six batters in the ninth.

Jansen gave up a leadoff triple to Varsho before striking out McCarthy and Carson Kelly and walking Perdomo and Rojas. Luplow struck out swinging to end it.

Madison Bumgarner (6-10) took the loss, surrendering eight hits and five runs - four earned - in six innings. It was in sharp contrast to Bumgarner's last appearance at Truist Park when he pitched a seven-inning no-hitter on April 25, 2021.

"I didn't feel like I had a feel for anything today," Bumgarner said. "It was a grind to say the least. Nothing felt good. My body didn't feel good. Stuff didn't feel good, but I just kept trying to make pitches, and we adjusted the game plan pretty quick and just tried to do what I could."

Diamondbacks: LHP Tyler Gilbert was placed on the 15-day injured list with a sprained left elbow. He's going to be on the shelf with no activity for several weeks, manager Torey Lovullo said. ... SS Yonny Hernandez was recalled from Triple-A Reno in a corresponding move. ... RHP Zach Davies (right shoulder inflammation) will make a rehab start early next week.

Braves: 2B Ozzie Albies, on the 60-day disabled list with a right foot fracture, is out of his walking boot and progressing well, manager Brian Snitker said. Albies is working on conditioning but no baseball activities and he isn't expected back until late August or early September. ... RHP Kirby Yates (Tommy John surgery) will make at least one more rehab appearance before he's activated.