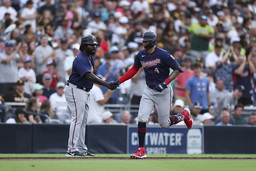 SAN DIEGO (AP) The Minnesota Twins had a nice bounce-back win against the San Diego Padres, spurred by some big home runs and a big break.

All-Star Byron Buxton hit a tying homer in the fourth inning off Joe Musgrove, and Carlos Correa gave the AL Central leaders some breathing room with a two-run shot during a five-run eighth that helped them beat the San Diego Padres 7-4 on Saturday.

The Twins got a huge break in the seventh. With the Padres trailing 2-1 and rookie C.J. Abrams at second base on a one-out infield single and throwing error by Correa at shortstop, Jurickson Profar's sharp grounder hit second base umpire Jerry Layne, rolled several feet away and was ruled a dead ball.

Abrams almost certainly would have scored had Profar's ball gone through the infield, but he had to stay at second. Manny Machado struck out and Eric Hosmer popped up to end the inning.

"That was great. He was our player of the game today," Correa joked about Layne. "He got smoked and he was hurting after. He was telling me how much it was hurting. It was good to get that break, so I made sure I thanked him."

Correa then homered to straightaway center field with one out in the eighth off Adrian Morejon for a 4-1 lead. It was his 13th.

Minnesota added on with an RBI single by Jose Miranda, a run-scoring double by Nick Gordon and a throwing error by Abrams to make it 7-1.

"That's a play that's completely out of our control," Twins manager Rocco Baldelli said. "Did it end up being a meaningful play in the game? Yeah. He was obviously trying to get out of the way of the ball. Sometimes you can't get out of the way of the ball. I've coached first base and I know that there are times you just have to wear it and the ball's coming quick. I can understand the other side being frustrated, but that's part of the game."

The Twins certainly welcomed that break and the home runs after they were routed 10-1 Friday night, when the Padres hit five long balls.

"It may have gone our way but we also took advantage of an opportunity late in the game and piled on some runs and put the game to a point where it was going to be in our favor," Baldelli said. "We had to do something like that. Carlos had a big swing to create some separation, and we had other guys have some good at-bats. That's what I'm going to choose to focus on."

The Twins handed Musgrove (8-4) his fourth straight loss. Musgrove, who earned his first All-Star selection this year, and the Padres are on the cusp of finalizing a $100 million, five-year contract that would start next year.

San Diego's Jurickson Profar hit a three-run homer off Tyler Duffey with one out in the ninth, his 10th.

Sonny Gray (6-3) allowed a solo home run to Machado with two outs in the third, but otherwise kept the Padres in check through five innings. Gray allowed five hits while striking out five and walking one.

Buxton tied it at 1 when he homered off the brick warehouse in the left field corner at Petco Park with one out in the fourth. It was his 26th. The Twins took the lead on Gilberto Celestino's RBI single in the fifth.

"Overall, it was well-played just in every aspect of the game," Gray said.

He would liked to have gone another inning, "but at the same time we won today's game and the guys came in and did a good job and we added after that," Gray said.

Musgrove hasn't won since June 16 at the Chicago Cubs. He allowed two runs and four hits in six innings, struck out eight and walked two.

The Padres hold a slim lead for the NL's second wild card.

Twins: Placed OF Max Kepler (broken right toe) and INF Miguel Sano (left knee inflammation) on the 10-day injured list. Sano had returned just four days earlier after missing 75 games following surgery in May to repair torn meniscus in the knee. Kepler was hurt when he was hit by a pitch at Detroit last Sunday. To take their spots on the roster, the Twins recalled outfielder Mark Contreras and selected the contract of infielder Tim Beckham from Triple-A St. Paul.